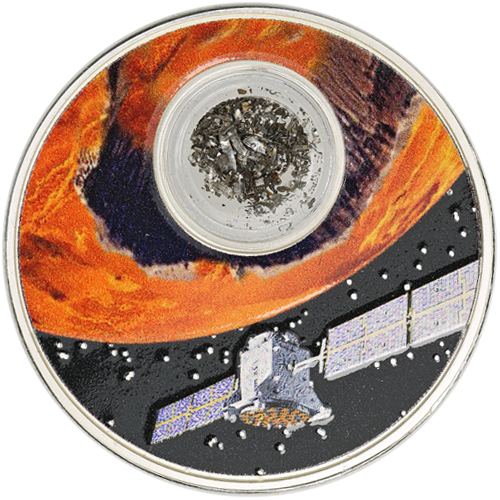 Mankind has always looked the skies with amazement. Unable to understand the universe around us for thousands of years, humans have learned more about the planets and celestial bodies nearest to us in the past 50 years than in the previous 2,000 years. Right now, the 2017 1 oz Silver Niue Mission to Mars Coin is available to purchase online at Silver.com.

All 2017 1 oz Niue Silver Mission to Mars Coins ship to you inside of a black CoinJewels display box and come with an individually numbered Certificate of Authenticity. Celebrate the beauty of the Red Planet and own your very own piece of outer-space with this special, limited-edition coin.

Now, you can own your very own piece of the solar system with an actual meteorite housed within a small capsule on these 2017 1 oz Silver Niue Mission to Mars Coins. Each coin features a piece of meteorite that crashed onto planet Earth thousands of years ago after traveling through the solar system for who knows how long.

Meteorites and other celestial bodies crash into Earth every day of the year, with most harmless in size and nature because the protective O-zone layer of the planet chips away and pulls apart the rocks as they shoot down toward the planet.

On the reverse of the 2017 1 oz Silver Niue Mission to Mars Coin you’ll find the image of a space satellite cruising past the red planet as the dark red hues and colorizations of the planet Mars dominate the foreground.

The obverse of the 2017 1 oz Silver Niue Mission to Mars Coin is the classic right-profile portrait of Queen Elizabeth II. Created in 1998 by Ian Rank-Broadley, this is the fourth-generation depiction of Her Majesty and is featured on the obverse of all Niue coinage.

The fourth planet in the Solar System, and second smallest overall, Mars is named after the Roman god of war. Referred to by many as the “Red Planet,” Mars gets its appearance from the prevalence of iron oxide on its surface that helps give it a red appearance. A terrestrial planet with a thin atmosphere, Mars has many features similar to Earth such as valleys, deserts, and polar ice caps.

If you have questions, please feel free to reach out to Silver.com. Our team members are available at 888-989-7223, online using our live chat, and via our email address.