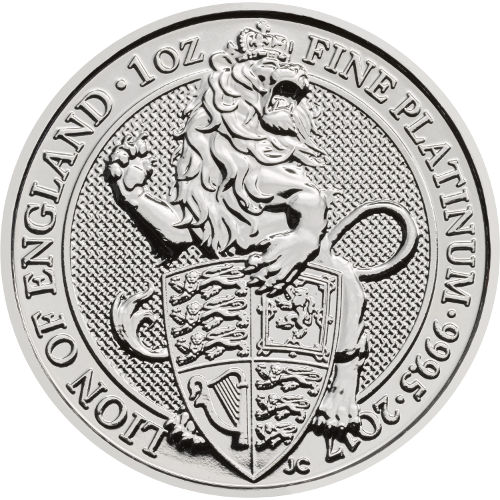 The Lion of England is one of the most important figures to the British monarchy, and the people of Great Britain as a whole. The first design in the Queen’s Beast Series from the Royal Mint, this image has driven sales for the new program which now includes three releases in the 10-design series. The 2017 1 oz Platinum British Queen’s Beast Lion Coin adds to the series, and is available to you today online at Silver.com.

The Queen’s Beast Series is a collection of gold, silver, and now platinum, coins that include 10 different designs in total. Introduced in 2016, the series is set to run through 2021 when the final release debuts. The designs in the series each reflect one of the 10 creatures depicted in statues at the coronation ceremony of Queen Elizabeth II in 1953.

Queen’s Beast coins launched with the Lion of England design. Each design includes a ¼ oz gold coin and a 1 oz gold coin. The issue of a 2 oz silver coin in the collection broke ground at the Royal Mint as the first-ever silver bullion coin in a 2 oz weight from the mint.

On the obverse of each Queen’s Beast Lion coin you’ll find the newest right-profile portrait of Queen Elizabeth II. Her Majesty appears on this coin in a fifth-generation depiction and was created in 2015 by Jody Clark, the youngest engraver at the Royal Mint ever to create the effigy of the Queen.

All of the 2017 1 oz Platinum British Queen’s Beast Lion Coins in this listing are available in BU condition. Coins in this condition have no signs of wear and tear, but you may notice minor flaws such as breaks in the luster, spotted surfaces, and contact marks from the striking of blanks at the mint.

We encourage all Silver.com shoppers to contact us with questions. We’re available at 888-989-723, online using our live chat, and via our email address. You can also find the latest platinum prices on our website throughout the day.