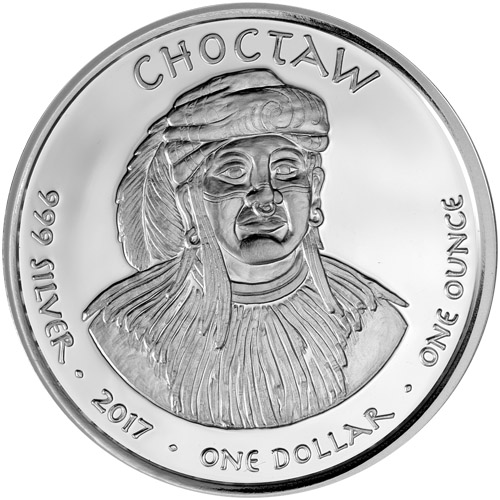 The Native Dollars Series from the Native American Mint is designed to represent the different states of the United States with a particular tribe known to have lived or currently reside within its boundaries. Additionally, the reverse design of each highlights an animal either native to the local environment or important to the survival and culture of the tribe. Today, the 2017 1 oz Proof Silver Mississippi Choctaw Water Moccasin Coin is available to you online at Silver.com.

Choctaw people are descendants of the Hopewell and Mississippian cultures that dominated the eastern regions of the Mississippi River Valley and its tributaries long before the arrival of European settlers. Choctaw people sided with the American cause during the American Revolution, favoring the bid of the Colonies for independence from the British Crown.

Although the Choctaw Nation never went to war with the United States, their people were forcibly removed west of the Mississippi River to Indian Territory during the early 19th century. As one of the first tribes to sign treaties giving their lands over to the US, the Choctaw negotiated for the largest and most desirable lands in the Indian Territory and were among the first major non-European ethnic groups granted citizenship in the United States.

Your 2017 1 oz Proof Silver Mississippi Choctaw Water Moccasin Coin arrives inside of a protective plastic capsule. This ensures that the brilliant satin finish applied to these proof coins, which lends visual brilliance to the coin’s finish, is protected for years to come.

On the obverse of the 2017 1 oz Proof Silver Mississippi Choctaw Water Moccasin Coin you’ll find the image of members of the Choctaw Nation. The Choctaw people have a modern population estimated around 160,000 living members as of 2005.

The reverse of the Silver Choctaw Water Moccasin Coin features the image of the venomous snake. These snakes are the only semi-aquatic viper species in the world, and while they’re commonly found in slow-moving and shallow lakes, streams, marshes, and bayous, they have been known to enter the seas of the Atlantic Ocean and Gulf of Mexico as well.

Please direct your questions about silver coins for sale to Silver.com. Our associate are available at 888-989-7223, online using our live chat, and via our email address.