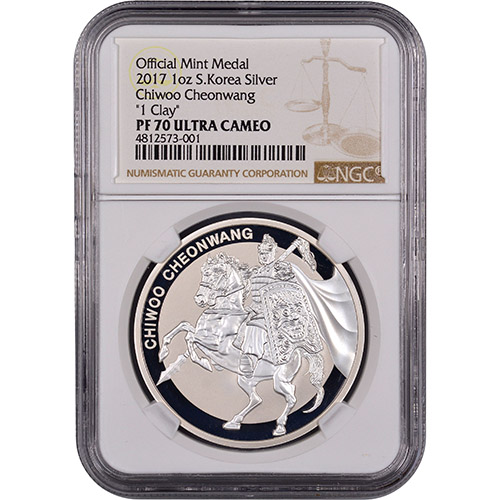 The new Chiwoo Cheonwang series of silver coins for sale from KOMSCO debuted in 2016, catapulting South Korea’s official state mint to the top of the watch list among investors and collectors. The Chiwoo collection bears a new design of the mythical Korean hero, and its popularity would provide a launch pad for more new collections from KOMSCO in years to come. Right now, 2017 1 oz Proof Silver South Korean Chiwoo Cheonwang Coins are available to purchase online at Silver.com.

Each 2017 1 oz Proof Silver South Korean Chiwoo Cheonwang coin available here is in perfect condition. Coins with a PF70 certification from the NGC exhibit full, original mint luster and lack any signs of detracting flaws on the surface areas or design elements of the coin. Additionally, these specimens feature the UCAM designation. Ultra-cameo coins have strong, frosted design elements with a deeply-mirrored, clear background field for impressive visual contrast in the coin’s finish.

The use of Chiwoo Cheonwang in this collectible series from KOMSCO brings back a legendary figure from Chinese and Korean cultural lore. Many of the exploits attributed to his god-like status are the result of inflation over time. In real life, Chiwoo was a leader of one of the nine tribes of China and is considered a founding father of the nation. In Korean lore, his exploits on the battlefield earned him the label the God of War and brought with it mythical status.

On the reverse of the 2017 1 oz Proof Silver South Korean Chiwoo Cheonwang Coin is the God of War himself atop his warhorse. He wields a long spear in his right hand and holds his powerful, oversized shield in his left. It is said that Chiwoo could control the weather and other elements, obscuring the vision of his enemies in battle and tipping the scales in favor of his armies.

The obverse of Proof Silver South Korean Chiwoo Cheonwang coins includes a closer look at the shield of Chiwoo. Upon its surface is the hideous face of Do ggae bi, a mythical beast from Korean lore who was said to have the power to ward off other evil spirits with his presence.