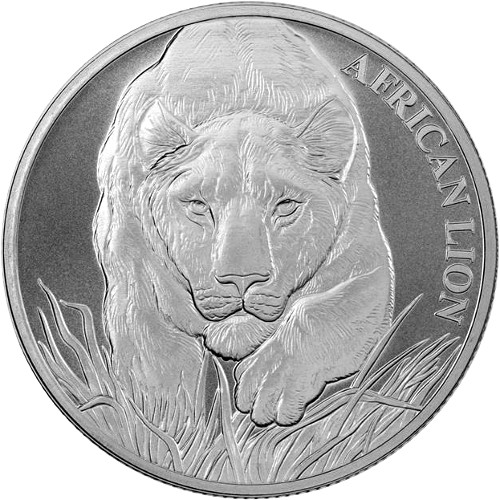 The African lion is one of the fiercest creatures on planet Earth. Prowling the open savannas of Africa for thousands of years, these massive and powerful cats are symbolic of Africa’s vast, untamed spaces. These impressive beasts are captured perfectly on the 2017 1 oz Silver Republic of Chad Lion Coin, available online now at Silver.com.

Silver African Lion coins were originally released in 2015 as coins issued for the nation of Burundi. After just one year, the contract and nation of issue shifted to the Republic of Congo. Some of the design features remain similar, such as the use of a male-female lion pairing on the obverse and a coat of arms on the reverse, but specific features have changed.

For the third release, yet another new nation has been chosen as the country of issue for these beautiful coins. African Lions are commonly known as the King of the Jungle, despite their natural habitat not including much for jungle territory. They are more commonly found on the open plains and grasslands of the African savannahs, where they live in family groups known as prides that have one adult alpha male and a group of females and young cubs.

On the obverse of these 2017 1 oz Silver Republic of Chad African Lion Coins is the image of a lioness, the first time a female lion has featured on the design solo.

All 2017 1 oz Silver Republic of Chad Lion Coins in this product listing feature a BU condition. Coins in this condition have no signs of wear and tear, though you may notice minor flaws ranging from breaks in the luster and spotted surfaces to contact marks from the production process at the mint.

We encourage all Silver.com shoppers to contact us with questions. You can reach out to our customer service team at 888-989-7223, chat with us live online using our free service, or send us an email with your inquiries.