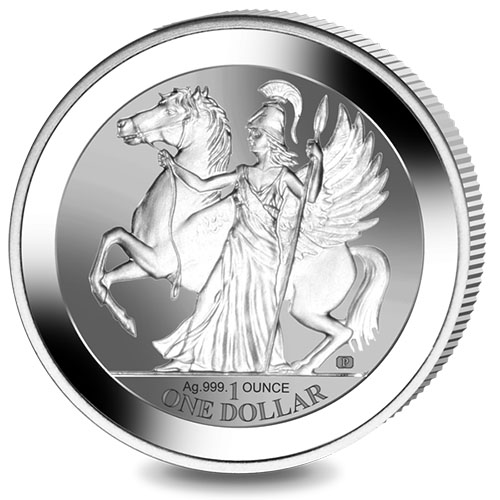 The Pegasus was a famed creature from the ancient world. This horse wasn’t like your average horse. It had wings, with the ability fly higher and faster than any creature from ancient mythology. The Pegasus currently features on a handful of silver products, but the newest of them is the Silver Pegasus Coin for the British Virgin Islands. The 2017 1 oz Silver Reverse Frosted Pegasus Coin is available to you for purchase online today at Silver.com.

In ancient Greek mythology, the winged horse known as the Pegasus is often spoken of as a white beast with a good heart and gentle demeanor. Pegasus was a mysterious creature often associated with divine inspiration from Zeus or the journey to heaven. The horse itself was granted immortality by Zeus on the final day of his life with transformation into a constellation in the heavens.

The 2017 1 oz Silver Reverse Frosted Pegasus Coin from Pobjoy Mint is the first-ever silver bullion coin struck for the British Virgin Islands, a collection of small islands in the Leeward Islands of the Lesser Antilles. The collection has low mintage figures and a new design each year on the reverse. Additionally, each coin has a reverse frosted finish with deeply-mirrored designs overlaying a strong, matte background.

On the obverse of the Silver Pegasus Coins is the right-profile portrait of Queen Elizabeth II. Her Majesty’s effigy used by the Pobjoy Mint is an exclusive design created in house and used only on the mint’s coins and rounds.

The reverse of the 2017 1 oz Silver Reverse Frosted Pegasus Coin includes the image of the Pegasus under the control of the goddess Athena. Athena and another god, Hermes, came to the aid of Perseus when he battled Medusa, and Pegasus was a gift to Perseus as a result of his defeat of the snake-haired Gorgon.

All 2017 1 oz Silver Reverse Frosted Pegasus Coins are in BU condition. Coins in BU condition have no signs of wear and tear, but aren’t perfect specimens either. You may find minor flaws from the striking of the die. These include breaks in the luster, spotted surfaces, or contact marks.

Pobjoy Mint was founded in Surrey, England in 1965 by the Pobjoy Family. Located just outside of London, Pobjoy Mint is the largest private mint operating today in Europe.

We encourage Silver.com customers to contact us with questions. You can reach us on the phone at 888-989-7223, chat with us live online, or simply send us an email with your inquiries.