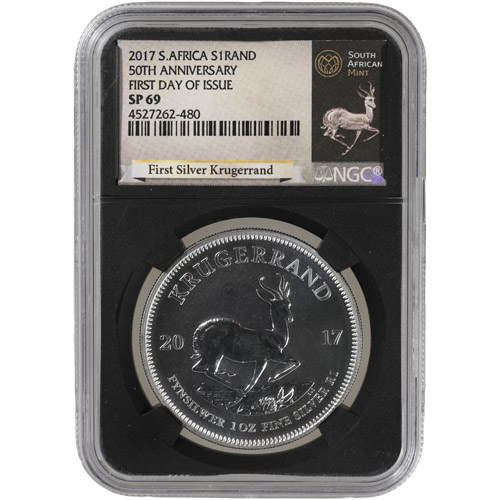 When the Gold South African Krugerrand hit its high-water mark in 1980, it was just about the only gold bullion coin available to investors. The year prior, the Gold Canadian Maple Leaf was introduced for the first time. In 1980, 1 oz Gold Krugerrands represented 90% of the gold bullion coin market. In 2017, the South African Mint celebrated the 50th anniversary of the series with the first-ever release of silver bullion coins.

All of these 2017 1 oz Silver South African Krugerrands are available to you in SP69 condition with plastic slabs. Known as Specimen Proof 69 coins, these specimens have full, original mint luster and a maximum of two minor detracting flaws. The only acceptable flaws at this grade level are minuscule contact marks or hairlines located outside of the primary focal points of the coin. First Day of Issue designations are for coins received by the NGC within 24 hours of release from the mint.

The reverse side of 2017 1 oz Silver Krugerrands features an image of a pronking Springbok antelope. The antelope is shown here pronking, a movement that consists of several small leaps in a row that allows the animal to reach a height of nearly six feet off the ground.

Please contact Silver.com if you have any questions. You can call us at 888-989-7223, chat with us live online, or simply send us an email.