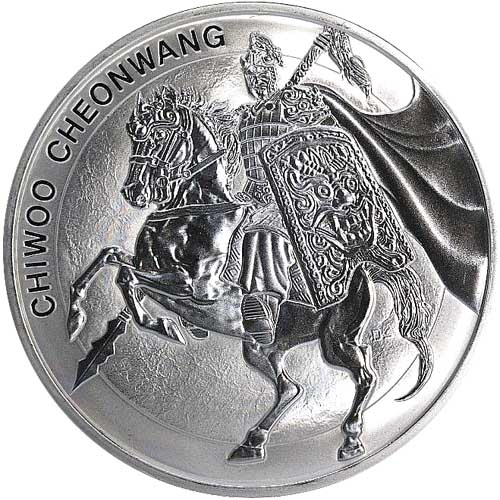 After a successful first release in 2016, the South Korean Chiwoo Cheonwang coin from Korea Minting and Security Printing Corporation, known as KOMSCO. The new 2017 issue of the coin features a slight twist in the coin’s reverse design, and a much higher mintage level than the first year’s issue. Right now, the 2017 1 oz Silver South Korean Chiwoo Cheonwang Coin is available to purchase online at Silver.com.

Each of the 2017 1 oz Silver South Korean Chiwoo Cheonwang Coins in this product listing are in BU condition. Coins in BU condition exhibit no signs of wear and tear, though you may notice a range of minor flaws including breaks in the luster, spotted surfaces, and contact marks from the coining process at the mint.

These 2017 Silver South Korean Chiwoo Cheonwang Coins are the second annual release of the increasingly popular silver medal collection from KOMSCO. The 2016 issue had a lower mintage of just 30,000 coins, but KOMSCO quickly sold half of the allotted mintage during presale. These coins are in high demand, so act fast!

Chiwoo Cheonwang is known as the God of War in Korean lore, and it is also said that his abilities include control over the weather and elements. He is particularly well-known for the fearsome mask he wears on his face, which in the modern day has been adopted by South Korean soccer fans to cheer on their beloved national team.

On the obverse of 2017 1 oz Silver South Korean Chiwoo Cheonwang Coins you’ll find a slight variation on the original 2016 design. While both coins feature the full-figure depiction of Cheonwang in his full armor, these 2017 coins now depict him seated atop a mighty warhorse.

The reverse of the Silver South Korean Chiwoo Cheonwang coins includes only the depiction of his fearsome mask. These coins have the term “Clay” in the name because they are not legal tender coins with a specific denomination. However, Korean lore uses the term clay to refer to the earth or soil, meaning the purchase of a 1 Troy ounce coin results in 1 Clay of soil or land purchased.

If you have any questions about these stunning new silver coins, please don’t hesitate to ask. Silver.com associates are available on the phone at 888-989-7223, on the web using our live chat feature, or via our email address.