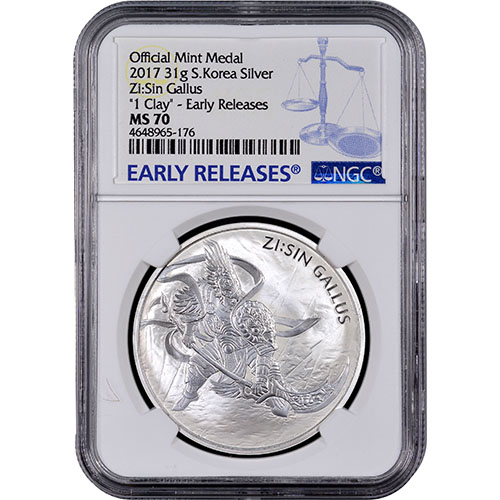 KOMSCO has a growing profile of gold and silver for sale online. The mint launched onto the international stage with greater visibility courtesy of the 2016 debut of the Chiwoo Cheonwang medals. Now, there’s a new 12-medal series coming from KOMSCO that focuses on the Twelve Guardians of Korean lore. Today, 2017 1 oz Silver South Korean Zi:Sin Gallus Medal is available online at Silver.com in perfect condition.

Certified coins are graded on a scale from 1 to 70. Known as the Sheldon numerical scale, the coins are graded from one on the low end to the highest possible score of 70. Many coins are graded by either the Numismatic Guaranty Corporation or the Professional Coin Grading Service.

All 2017 1 oz Silver South Korean Zi:Sin Gallus Medals available from Silver.com in this listing are in perfect condition. Products with a Mint State 70 grade feature full, original mint luster and lack all possible detracting flaws. The Early Release designation, ER, is featured on the label in the protective slab and indicates the coins were received for certification by the NGC within the first 30 days of KOMSCO’s 2017 release date for the coins.

On the obverse of all Silver Zi:Sin Gallus Medals is the image of the Twelve Guardian member known as Gallus. He is known as the messenger of light who possesses the power to blast a bright ray of light onto the battlefield, scaring away the forces of evil when god’s armies arrive for battle.

The Zi:Sin Series from KOMSCO features 12 different designs, with Gallus released in 2017 as the debut in the collection. All of the Twelve Guardians lead god’s armies against the forces of evil, watching out for mankind from each of the 12 directions.

2017 1 oz Silver South Korean Zi:Sin Gallus Medals feature the image of Do ggae bi. A mythical creature known simultaneously as a ghost, monster, or god, Do ggae bi’s hideous face was often used to ward off evil spirits and appeared on the shield of Chiwoo Cheonwang.

Please feel free to reach out to Silver.com at 888-989-7223 if you have questions. You can also connect with us online through our live web chat or email address.