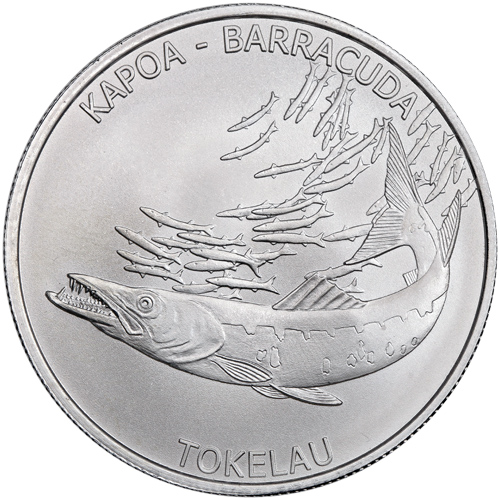 It may not have the size of the Great White Shark, but the barracuda is one of the most ferocious and feared fishes to be found in the waters of planet Earth. Relentless hunters that won’t let go once they’ve set upon their target, the fearsome and powerful barracuda is featured on a new coin for the nation of Tokelau. The 2017 1 oz Silver Tokelau Barracuda Coin is now available to you online at Silver.com.

Barracuda have a snake-like appearance that is capped off by the prominent, sharp-edged teeth that line their lower jaw. The fang-like teeth have an appearance similar to that of piranha. They also have two dorsal fins widely separated on their body, with an anterior fin that features five spines and a posterior fin with one spine and 9 soft rays.

Each of the 2017 1 oz Silver Tokelau Barracuda Coins listed here are in BU condition. Coins in BU condition have no signs of wear and tear, however you are likely to find minor flaws such as breaks in the luster, spotted surfaces, or contact marks from the coining of the blanks at the mint facility.

On the reverse of the 2017 1 oz Silver Tokelau Barracuda Coin is the image of a school of barracuda swimming through the tropical waters of the South Pacific. Engravings include the nation of issue below the design field, as well as the name of the species represented in both English and the native Tokelau tongue (Tokelauan).

The obverse of all Silver Barracuda coins include the right-profile portrait of Queen Elizabeth II, which was created in 1998 by Ian Rank-Broadley as the fourth-generation image of Her Majesty. Also included below the Queen’s effigy is the badge of Tokelau, which features the motto “Tokelau mot e Atua,” which translates into English as “Tokelau for the Almighty.”

Tokelau is a tropical island country located in the southern Pacific Ocean. The nation consists of three tropical coral atolls, and Swains Island, which is governed separately as a part of American Samoa. The combined land area of the islands is just 4 square miles and the population numbers just 1,400 people.

We encourage all Silver.com customers to contact us at 888-989-7223 with questions. You can also reach out to us online using our live chat and email address. The silver spot price is updated constantly on our homepage for your convenience as well!