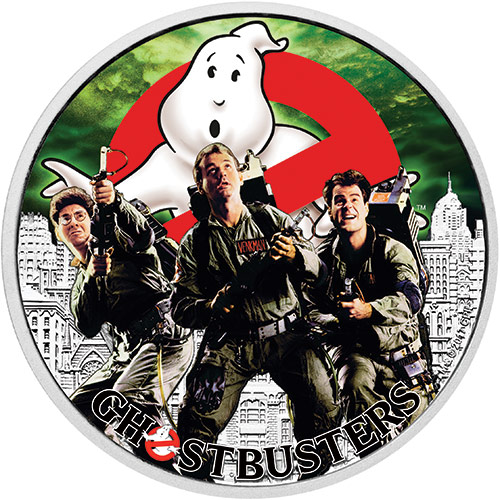 Everything from the 1980s has come back around in the early 2000s to be in vogue once again, and that includes some of the most iconic films of the decade. Among them, Ghostbusters is arguably one of the greatest cult classics of the era as it introduced moviegoers to a new level of cinematic effects. The 2017 1 oz Silver Tuvalu Ghostbusters Crew Coin is available to you today online at Silver.com.

When the original Ghostbusters was released in 1984, the film featured a star cast of characters that helped the comedy reach impressive heights for such an “out-there” concept as hunting down ghosts in the Big Apple. The film starred Bill Murray, Dan Aykroyd, and Harold Ramis as a team of scientists who traded in their lab coats for ghost hunting get-ups.

Joining the cast were Sigourney Weaver and Rick Moranis, with Ivan Reitman behind the lens directing and producing the film. The film grossed an impressive $242 million in the United States, and is remembered today as 20th on the list of AFI’s 100 Years, 100 Laughs film list.

All 2017 1 oz Silver Tuvalu Ghostbusters Crew Coins ship to you inside a beautiful presentation case with black and green colorization, a themed shipper, and the words “Who Ya Gonna Call?” on it. A numbered Certificate of Authenticity is also included with each individual coin.

Following the Ghostbuster Crew Coin release in the series are the upcoming issues of a Slimer and Stay Puft coin. All coins include images that are trademarked by and copyright of Columbia Pictures Industries Inc.

On the obverse of each Ghostbusters Crew Coin you’ll find the image of Queen Elizabeth II. Captured in right-profile relief, this image was created by Ian Rank-Broadley in 1998 as the fourth-generation depiction of Her Majesty.

The reverse of the 2017 1 oz Silver Tuvalu Ghostbusters Crew Coin includes a colorized finish on the images of all three scientists from the original crew, as well as the aforementioned green sky in the background and the red-and-white colorization of the logo: a ghost with a red line through it. The skyline of New York City is featured in brilliant silver finish.

We encourage all Silver.com customers to contact us at 888-989-7223 with questions. You can also connect with our team of associates on the web using our live chat and email address, or visit our homepage at any time for the latest information such as today’s silver price.