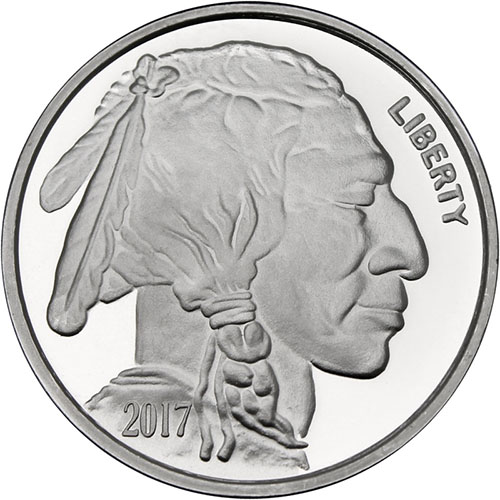 It is not uncommon to find some of the most iconic image from American coinage history appearing on modern commemorative bullion and round programs. The United States Mint, for example, continues to use a number of iconic designs on modern programs. SilverTowne Mint, a private facility in Indiana, does the same thing with the Buffalo Nickel design. Right now, the 2017 1 oz SilverTowne Silver Buffalo Round is available to purchase online at Silver.com.

One of the most beloved coin designs from American history didn’t originate on a proof coin, but instead, on the humble five-cent circulation coin. James Earle Fraser’s 1913 design for the US nickel became known as the Buffalo Nickel, and has been replicated on countless products since.

Fraser chose a bison for the obverse face of the coin, and a Native American chieftain for the reverse of the original nickel. His new design was used from 1913 to 1938. Today, it appears on the Gold American Buffalo coin from the US Mint, among other private mint offerings as well.

On the obverse of these 2017 1 oz SilverTowne Silver Buffalo Rounds you’ll find the image of a Native American tribal member. Captured in right-profile relief, Fraser is said to have used the facial features of three different leaders of the early 20th century to create the image used on the Buffalo Nickel.

The reverse of the SilverTowne Silver Buffalo Round includes a depiction of Black Diamond. The bison that inspired Fraser’s design was a resident of the Central Park Zoo in New York City in the early 20th century, and is featured on the reverse of these rounds with all original engravings aside from the face value.

SilverTowne Mint is a private facility that was founded in rural Winchester, Indiana in 1949. Today it is one of the largest private facilities in the United States.

If you have any questions, feel free to contact Silver.com. Our customer service associates are available to field your questions on the phone at 888-989-7223. You can also reach us online through our live web chat and email features.