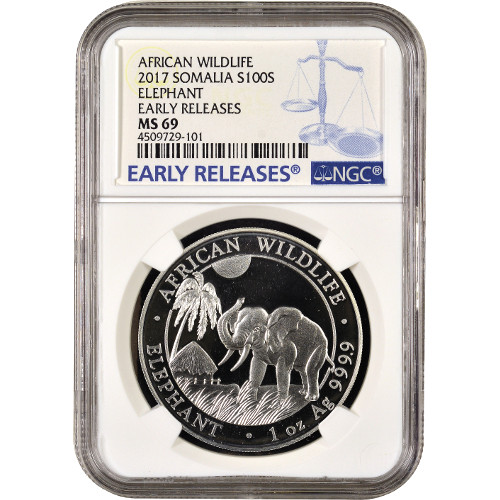 The African Wildlife Series Somalian Elephant Series has been growing steadily, in popularity and size, in recent years. Available since 2004 for the nation of Somalia, these coins have gained increased notoriety as a result of their ever-changing design fields. Right now, 2017 1 oz Silver Somalian Elephant Coins are available to purchase online at Silver.com with near-perfect certification!

Each 2017 1 oz Silver Somalian Elephant coin in this product listing is a near-perfect coin according to the NGC. Coins with an MS69 grade exhibit full, original mint luster and a maximum of two minor detracting flaws. Those flaws include miniscule contact marks or hairlines, and are located outside the primary focal areas of the coin.

Early Release coins are from a distinct time period in the release of 2017 Silver Somalian Elephants. These coins had to arrive at the NGC or an approved third-party depository within the first 30 days of the release date set by the Bavarian State Mint.

Somalian Elephant coins are now available in silver, gold, and platinum, with colorized Day and Night Coin Sets. 2016 marked the addition of a Somalian Platinum Elephant, and for 2017 the program has expanded to include the first-ever release of silver fractional-weight coins, as well as new fractional weights in gold.

On the obverse of the 2017 1 oz Silver Somalian Elephant coin you’ll find the image of the newest African Elephant design. The fourteenth design used in the series, it features an African elephant in the foreground amidst the grasses of the savanna, with a traditional thatch-roof hut in the background and a small palm tree.

The reverse of all Silver Somalian Elephant coins includes the image of the national crest. The Somalia coat of arms includes a heraldic shield in the middle with a single star on it, similar to the national flag. Engravings on this face include the nation of issue, year of issue, and face value of the coin.

If you have questions about silver coins for sale please don’t hesitate to ask Silver.com’s customer service team. We’re available at 888-989-7223, online using our live chat, or via our email address.