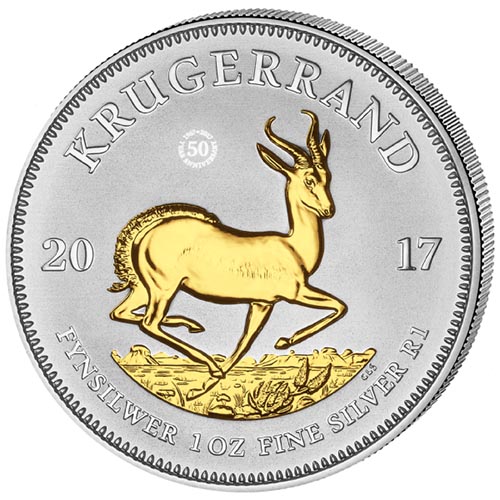 For one year only, the South African Mint is breaking with tradition in the coining of its popular Gold Krugerrand to celebrate the 50th anniversary of the world’s first-ever gold bullion investment coin. To mark a half-century of sales, the mint is celebrating with the release of a first-ever Silver Krugerrand coin. Going one step further, for the first and only time, you’ll now find a Silver Krugerrand with a gilded finish. Today, the 2017 1 oz Silver South African Krugerrand Coin is available to you online at Silver.com.

As part of the 50th anniversary celebration of the Gold Krugerrand, the South African Mint is bringing the iconic designs of the gold coin to life on other precious metals. Chief among these are the one-time offerings in 2017 of the Silver Krugerrand and the Platinum Krugerrand.

These coins are meant for release only in 2017, with the following year reverting back to only including a Gold Krugerrand coin from the South African Mint. As such, 2017 is the only year in which you’ll find a gold gilded coin in the Krugerrand series.

All 2017 1 oz Silver South African Krugerrand Coins in this listing are in BU condition. Coins in BU condition have no signs of wear and tear, though you may notice minor flaws such as breaks in the luster, spotted surfaces, or contact marks from the production process at the mint.

A gilded silver coin is a stunning combination of gold and silver in one precious metal bullion product. The Springbok antelope featured on the coin’s reverse surface has a layering of 24-karat gold applied to bring contrast between the silver bullion content of the coin and its design field.

On the reverse of the 2017 1 oz Silver South African Krugerrand Coin you’ll find the image of the Springbok antelope. The official symbol of South Africa, this speedy resident of the plains has been on the Krugerrand since its debut in 1967.

The obverse of the Silver South African Krugerrand includes the left-profile portrait of Paul Kruger. Born Stephanus Johannes Paulus Kruger, he was known to many in South Africa as Oom Paul, or Uncle Paul. He led the cause for South African independence during the First Boer War, and served from 1883 to 1900 as the third president of the South African Republic.

Please feel free to reach out to Silver.com if you have any questions. Our customer service team is available at 888-989-7223, online using our live chat, and by sending us an email with your inquiries.