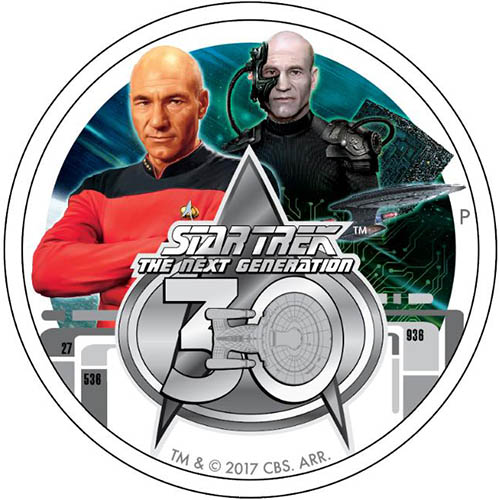 There are few science-fiction franchises that can boast the type of long-term success and generational fan following of Star Trek. Introduced in 1966 by Gene Roddenberry, the franchise includes a total of 13 feature films and six television series as of 2017. Right now, the 2017 1 oz Proof Silver Tuvalu Star Trek: The Next Generation 30th Anniversary Coin is available to purchase online at Silver.com to mark the special occasion!

Your purchase of a 2017 1 oz Proof Silver Tuvalu Star Trek: The Next Generation 30th Anniversary Coin includes a stunning presentation package with Star Trek­­-themed design to the round case and a green light that comes on when you open the lid. Each coin ships with an individually numbered Certificate of Authenticity.

These silver coins for sale help commemorate the 30th anniversary of the TV debut for Star Trek: The Next Generation. The second TV series in Star Trek history, following The Original Series (1966-1969), this series is considered one of three TV series that have sequel storylines to the original television series.

The Next Generation was followed, in real life and the story arch of the shows, by Deep Space Nine and Voyager. Later, two series were introduced as prequel storylines to The Original Series. Enterprise ran from 2001 to 2005, and Discovery debuts in 2017.

On the reverse of all 2017 1 oz Proof Silver Tuvalu Star Trek: The Next Generation 30th Anniversary Coins is the image of actor Patrick Stewart in his acclaimed role as Captain Jean-Luc Picard, captain of the USS Enterprise NCC – 1701 – DD. Brilliant colorization has been added to Stewart’s image, as well as that of Locutus of Borg, the Borg Cube, and the USS Enterprise in the background field.

The obverse features the familiar right-profile effigy of Queen Elizabeth II. Since 1952, Her Majesty has appeared on British and commonwealth coinage as monarch and head of state. This is the fourth-generation depiction of Her Majesty and was created in 1998 by Ian Rank-Broadley.

Founded in 1899, Perth Mint is Australia’s oldest operating mint. Originally part of the British Royal Mint in the country, today it operates separate of the Royal Australian Mint in Canberra and is owned by the state government in Western Australia.

If you have questions, please don’t hesitate to ask. Silver.com associates are available at 888-989-7223, online using our live web chat, or via our email service.