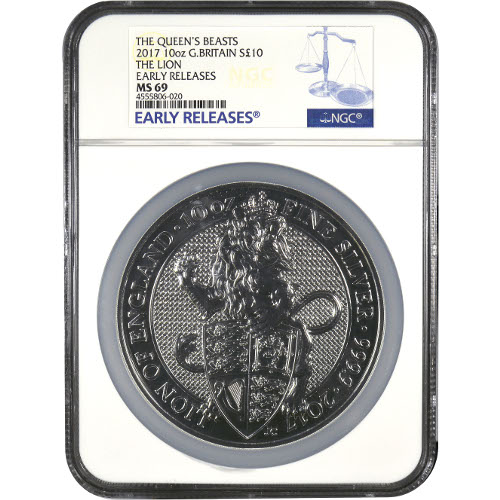 One of the newest bullion coin programs from the Royal Mint is a 10-coin series of Queen’s Beast silver and gold options. Inspired by the extravagant ceremony that saw Queen Elizabeth II crowned as Queen of England in 1953, the Queen’s Beast range features replicas on bullion coins of the statues present during her ceremony. Today, the 2017 10 oz Silver British Queen’s Beast Lion Coin is available to you online at Silver.com in near-perfect condition!

The lion has played a long role in the heraldry of England. Lions were first chosen by knights of the medieval time period as a symbol on their heraldic shield because of the bravery and prowess of the beasts. Today, the lion remains a pivotal creature in the heraldic imagery of the United Kingdom.

All the 2017 10 oz Silver British Queen’s Beast Coins in this listing are considered near-perfect by the NGC. Coins with an MS69 grade feature full, original mint luster along with a maximum of two minor detracting flaws. Early Release coins are those which arrive for certification at the NGC, or an approved third-party depository, within the first 30 days of the release date the Royal Mint set for the coins.

On the obverse of the 2017 10 oz Silver British Queen’s Beast Lion coin you’ll find the fifth-generation depiction of Queen Elizabeth II. Her Majesty’s effigy appears on the obverse of all British coinage and has been since she ascended to the throne in 1952. This design came from Jody Clark in 2015, who at 33 years old is the youngest designer from the mint to create Her Majesty’s effigy.

Please don’t hesitate to contact Silver.com with questions. You can reach us on the phone at 888-989-7223, chat with us live online, or simply send us an email with your inquiries. Visit our website at any time to view all of our silver coins for sale!