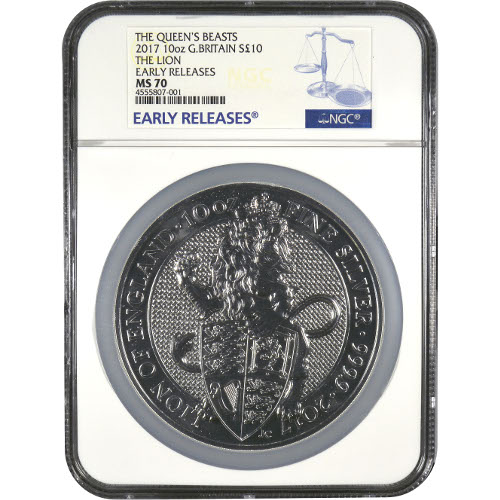 The Royal Mint of London is one of the world’s oldest and most prestigious refineries. As a result of the expansion of the British Empire around the world, the Royal Mint once operated refineries on as many as four different continents. Today it remains the primary production facility for coinage in the United Kingdom. The 2017 10 oz Silver British Queen’s Beast Lion Coin is available to you today online at Silver.com in perfect condition!

As of 2017, the Royal Mint has released a total of 3 designs in the collection and you’ll now find a new platinum coin and 10 oz silver option in the Lion of England design. This is the perfect expansion of the series and offers something for everyone looking to buy silver.

On the obverse of the 2017 10 oz Silver British Queen’s Beast Lion coin you’ll find the fifth-generation depiction of Queen Elizabeth II. Her Majesty’s effigy appears on the obverse of all British coinage and has been since she ascended to the throne in 1952. This design came from Jody Clark in 2015, who at 33 years old is the youngest designer from the mint to create Her Majesty’s effigy.

The 2017 10 oz Silver British Queen’s Beast Coins available to you in this listing are considered perfect specimens by the NGC. Coins with a Mint State 70 grade exhibit full, original mint luster and lack all forms of detracting flaws on the surface areas of the coin. Early Release coins are those which arrive for certification at the NGC, or an approved third-party depository, within the first 30 days of the release date the Royal Mint set for the coins.

We encourage all Silver.com customers to contact us with questions. You can reach out to us on the phone at 888-989-7223, connect with us online using our live chat, or send us an email. The latest silver prices are available on our website at all times!