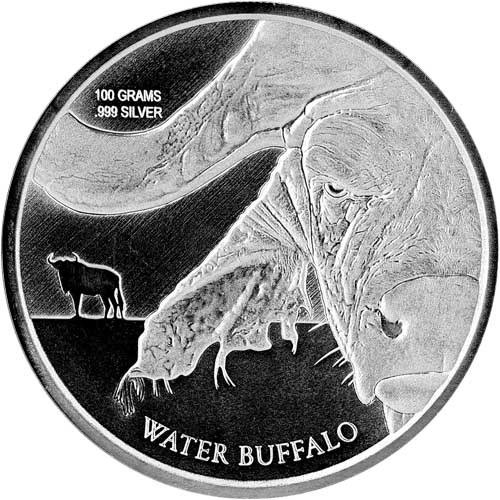 The Democratic Republic of Congo is the primary foreign government that has turned to the Scottsdale Mint of Arizona for the striking of silver bullion coinage. The mint has produced numerous coin programs for the nation to date, and now another arrives with the Silver Water Buffalo Coin. Today, the 2017 100 Dram Silver DRC Water Buffalo Coin is available to you online at Silver.com.

The 2017 100 Dram Silver DRC Water Buffalo Coin is the first-ever release of a new coin program. These coins follow the popular releases from the Scottsdale Mint of the Silverback Gorilla coins and the Silver African Lion. The latter coin was originally issued for Burundi, but is now a Silver Congo coin from Scottsdale.

Each of the 2017 100 Gram Silver Democratic Republic of Congo Water Buffalo Coins in this listing are in BU condition. Coins in BU condition exhibit no signs of wear and tear, although you may notice a range of minor flaws including breaks in the luster, spotted surfaces, and contact marks from the coining process.

Silver Water Buffalo Coins have a concave design field on both the obverse and reverse sides, with a crisp, reeded edge to the coin. There is a distinct design pattern on the background field of the reverse that mimics a smooth river rock appearance. It appears under the coat of arms design. Additionally, the coins are only available in multiples of 7. The coins will ship to you sealed inside of plastic tubes for protection courtesy of the Scottsdale Mint.

The obverse of all 2017 100 Gram Silver DRC Water Buffalo Coins includes two images of the water buffalo. In the far background you’ll notice the shadowy outline of the massive beast, while the nearly field is dominated by the gruff, imposing image of the buffalo’s face. Water buffalo originated in South Asia, Southeast Asia, and China, and today can also be found in Europe, Australia, South America, and certain African countries.

On the reverse side of the Silver Water Buffalo Coin is the coat of arms for the Democratic Republic of Congo. Formerly a Belgian colony in the late 19th and early 20th centuries, Congo is the second-largest nation in Africa by size and 11th largest in the world. The coat of arms features the national motto of “Justice-Paix-Travail,” which translates from French to “Justice, Peace, Work.”

Please contact Silver.com at 888-989-7223 with questions, or connect with us online using our live chat and email features.

Country: Democratic Republic of the Congo