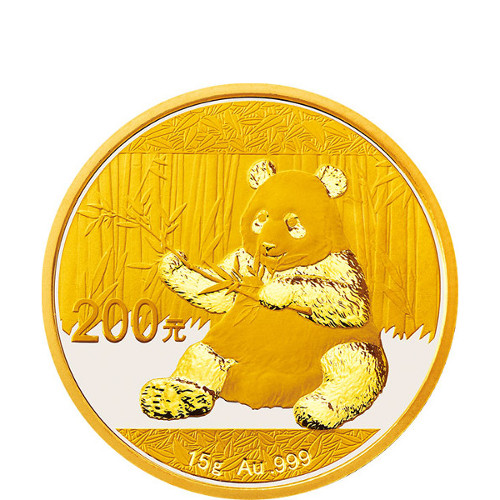 Chinese Gold Pandas are the official gold bullion coin of the People’s Republic of China. These coins were first introduced in 1982 and have been a popular item ever since. Get your 2017 15 Gram Gold Chinese Panda today at Silver.com.

Chinese Gold Pandas switched from ounces to grams in 2016, making them the first major coin series in the world to use grams as measurements instead of ounces. The switch was made due to the fact that China uses the metric system.

The obverse of each 2017 15 Gram Gold Chinese Panda Coin features the image of a Giant Panda. Pandas are a common symbol of China, as they are native to the country. These gentle giants are commonly seen eating bamboo, just like the one on this coin.

On the reverse of every coin features the image of the Temple of Heaven. This temple is one of many buildings in a large religious complex in south-central Beijing. The temple, which was built in the 15th century, appears on the reverse of every year in the Chinese Panda Series, which sets it apart from the ever changing obverse.

Each 2017 15 Gram Gold Chinese Panda Coin in this listing in is Brilliant Uncirculated condition. Coins in BU condition have no signs of wear and tear, but you may see minor flaws, such as breaks in luster, surface spotting or contact marks.

The Chinese Panda Coin Series, both the gold and silver coins, are created by the Chinese Mint. The mint has facilities in Beijing, Shenzhen, Shanghai and Shenyang. The mints don’t use mint marks, however, so it impossible to tell which mint produced which coins.

If you have questions, please don’t hesitate to contact Silver.com associates. You can contact us on the phone at 888-989-7223, chat with us online, or email us.