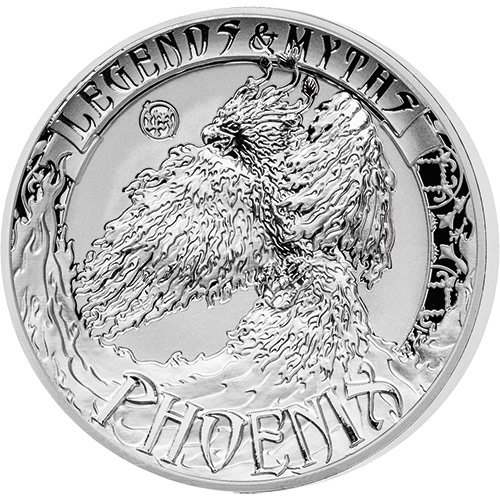 The Silver Legends and Myths Collection from MDM Deutsche Munze, a private minting facility in Germany, is a sovereign release for the nation of the Solomon Islands. These coins debuted in 2016 with a Griffin and Mermaid release, and pick up now in 2017 with stunning new designs that continue the series’ brilliance. Today, the 2017 2 oz Reverse Proof Silver Solomon Islands Legends and Myths Phoenix Coin is available online at Silver.com.

The Solomon Islands, a sovereign island nation in the Oceania region with six major islands and more than 900 smaller islands that cover some 11,000 square miles. This release of five coin designs from MDM marks the first major proof series collection for the small nation.

Featured on the reverse of the2017 2 oz Reverse Proof Silver Solomon Islands Legends and Myths Phoenix coin is the image of the bird during a period of cyclical regeneration. The phoenix is depicted rising out of the flames and ashes of its predecessor’s death to revive a new life.

The series features designs commemorating some of the world’s most well-known legendary beasts and mythical creatures, including the griffin, mermaid, and wizard. For this release, the focus is on the phoenix, a bird from Greek and Roman mythology that is associated with the sun, and said to obtain new life by arising from the ashes of its predecessor.

On the obverse of the 2017 2 oz Reverse Proof Silver Solomon Islands Legends and Myths Phoenix coin features the same image from the obverse of all coins in the series. The right-profile portrait of Queen Elizabeth II featured was created in 1998 by Ian Rank-Broadley.

All Legends and Myths coin are reverse proof products with a double high-relief striking, which lends visual brilliance and depth to the design. Reverse proof coins have frosted backgrounds and mirrored finishes on the design sets. Your purchase ships to you inside of a themed, circular display box with a glass lid for easy viewing and Certificate of Authenticity to validate your purchase.

Please don’t hesitate to reach out to Silver.com. Our customer service team is available at 888-989-7223, online through our live web chat service, and via our email address.