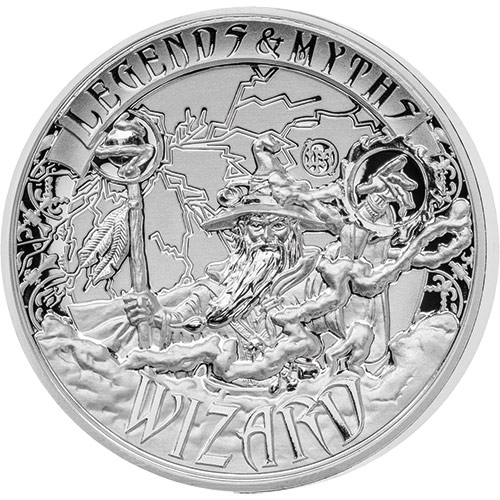 Wizards have gone by many different names throughout the course of human history, depending upon the time one lived in and the culture they were a part of. They were known as mage, sorcerer, sorceress (female), witch (female), warlock, or wizardess (female). An exciting new series of proof silver coins for the Solomon Islands captures the mysticism of the wizard brilliantly. Right now, the 2017 2 oz Reverse Proof Silver Solomon Islands Legends and Myths Wizard coin is available to purchase online at Silver.com.

Each of the 2017 2 oz Reverse Proof Silver Solomon Islands Legends and Myths Wizard coins features a double high-relief striking technique that gives the coins visual depth and 3D brilliance. The reverse proof finish lends a strong, frosted appearance to the background field and a deeply-mirrored, clear image to the design set.

The obverse of the Silver Solomon Island Legend and Myths coins features the image of Queen Elizabeth II, captured in right-profile relief. Created in 1998 by Ian Rank-Broadley. This is the fourth-generation depiction of Her Majesty since her 1952 ascension to the throne of England.

On the reverse of the 2017 2 oz Reverse Proof Silver Solomon Island Legends and Myths Wizard coin is the image of a wizard conjuring up his magic with a staff in his right hand and his left hand raised as he works his magic. Each coin’s reverse field has a unique privy mark found only on the coins in this collection.

A wizard is said to be someone who uses magic derived from a supernatural, evil, or occult source. Today, magicians and wizards are common figures in the works of fantasy and fantasy literature, as well as role-playing game. When it comes to wizards specifically, they are often used in the form of wise old men who act as mentors, such as Merlin in the King Arthur stories.

This is the fifth and final coin in the Legends and Myths collection, which included (in order) a Griffin, Mermaid, and Phoenix coin release in 2016 and the 2017 issue of the Sea Monster. All coins in this Legends and Myths Collection ship to you in a circular, branded collection box with a glass lid. Included is a Certificate of Authenticity with unique, colorized artwork for the specific release.

If you have any questions, please feel free to contact Silver.com. Our customer service associates are available at 888-989-7223, online using our live chat, and via our email address.