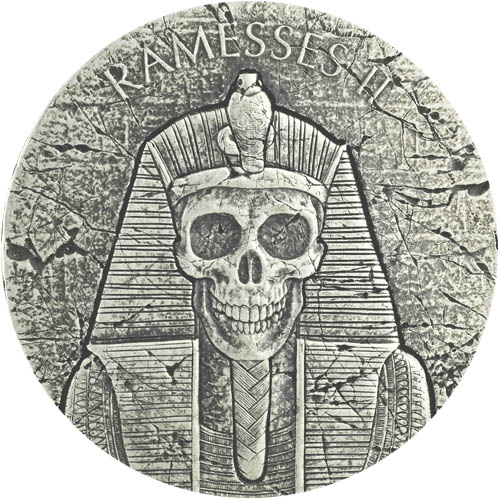 When buying silver, items with ancient appeal often catch the eye of collectors. Even investors aren’t immune to the beauty of collectible silver, especially when it features pure silver content from a well-known mint. Scottsdale Mint’s Egyptian Relic Series is a perfect example of silver bullion with stunning visual appeal, and the fifth design in the series is now available! The 2017 2 oz Silver Republic of Chad Egyptian Relic Series Ramesses Afterlife Coin is available to you now online for purchase at Silver.com.

Ramesses II was the pharaoh of the Egyptian Empire for nearly 70 years, and managed to live to the age of 90 or 91 at a time when the average Egyptian was lucky to live beyond infancy. The average age at death for many Ancient Egyptians was 19, with even those who survived childhood enjoying an average life expectancy of only 30 years for women and 34 years for men.

Ramesses the Great, as he was known, lived from 1303 BC to his death as ruler of Ancient Egypt in 1213 BC. He was originally buried in the Valley of the Kings in his initial tomb, but later moved to a different royal cache. His remains were found there in 1881. Like many Egyptian pharaohs, his remains had been carefully prepared for the afterlife.

On the obverse of the 2017 2 oz Silver Republic of Chad Egyptian Relic Series Ramesses Afterlife coin you’ll find the same front-facing effigy of Ramesses II found on the standard Ramesses coin, but instead of his face as found on many effigies, this one includes his bare skull instead. Ancient Egyptians of high social standing and those pharaohs who ruled the empire were intricately prepared for the afterlife.

Ramesses II, and many others, were mummified in a process meant to preserve their physical being for thousands of years while also preparing their soul for the afterlife. The heart, brain, and other major organs were often removed and placed in jars. These organs, along with treasured personal belongings, were entombed with the mummified body to travel with the individuals to the afterlife.

The reverse of all Egyptian Relic Series Ramesses Afterlife coins include the coat of arms for the Republic of Chad. It features engravings that indicate the nation of issue, face value, weight, purity, and metal content of the coin.