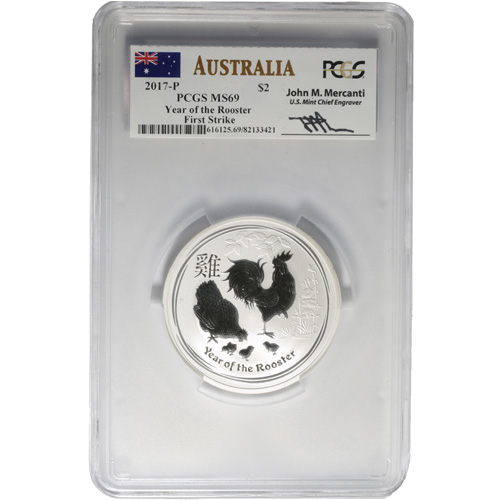 2017 marks the Year of the Rooster on the Chinese Lunar Calendar, the 10th year in the 12-year cycle of the Zodiac. Since 1996, the Perth Mint has been producing gold and silver coins for sale featuring images of each of the 12 animals of the Zodiac on brilliant bullion and proof collectible coins. Now, the 2017 2 oz Silver Australian Lunar Rooster coin in near-perfect condition is available to you for purchase online at Silver.com.

The obverse side of 2017 2 oz Silver Australian Lunar Roosters includes the image of Queen Elizabeth II. Her Majesty is featured here in right-profile relief in a design created in 1998 by Ian Rank-Broadley. This is the fourth-generation portrait from the Royal Mint of England and the fifth to feature on Australian coins.

On the reverse face of 2017 Silver Australian Lunar Rooster is the design of a family of chickens. Included in the design is a depiction of a rooster standing near a hen and three chicks. The rooster is on alert while the hen and chicks peck for seeds on the ground to eat.

These 2017 2 oz Silver Australian Lunar Roosters are available in near-perfect condition. Coins with an MS69 certification have full, original mint luster and a maximum of two minor detracting flaws. Those flaws are limited to minuscule contact marks or hairlines. First Strike designations indicate the coins were received for grading in the first 30 days following release by the Perth Mint.

Silver.com customer service is available to you at 888-989-7223. We are available on the web as well using our live chat and email address.