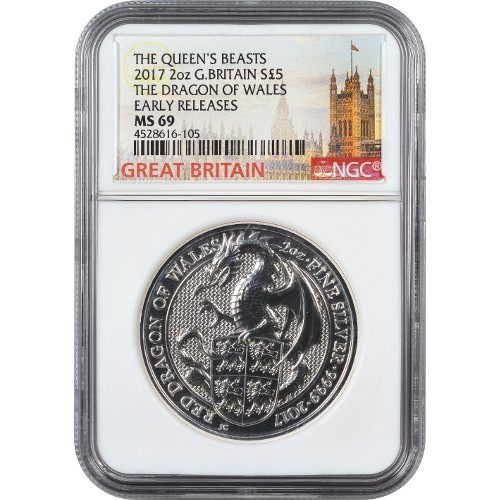 The silver coins of the Queen’s Beast Collection from the Royal Mint are truly special. These coins, available in 2 Troy oz of .9999 fine silver, represent the first time the mint has ever struck a silver coin in this particular weight. The Dragon of Wales appears as the third design in this popular series, and is available here with certification. Today, the 2017 2 oz Silver British Queen’s Beast Dragon Coin is yours from Silver.com with NGC certification.

The Queen’s Beast Collection from the Royal Mint takes collectors back in time by reproducing 10 of the animal statues featured in Westminster Abbey during the 1953 coronation ceremony of a young Queen Elizabeth II. These animals will feature on various coins, both gold and silver, released by the Royal Mint in the years to come.

All 2017 2 oz Silver British Queen’s Beast Dragon Coins in this listing earned near-perfect certification. An MS69 coin from the NGC has full, original mint luster, but also includes a maximum of two minor detracting flaws. These flaws are limited in scope to miniscule hairlines or contact marks outside the primary focal areas.

As an Early Release coin, the NGC verifies that these Silver Queen’s Beast products were received within 30 days of their release date by the Royal Mint. Coins must arrive in that timeframe at the NGC depository or an approved third-party facility.

Please don’t hesitate to contact Silver.com with questions at 888-989-7223. You can also connect with us online through our live chat and email address, or visit our website for the current price of silver.