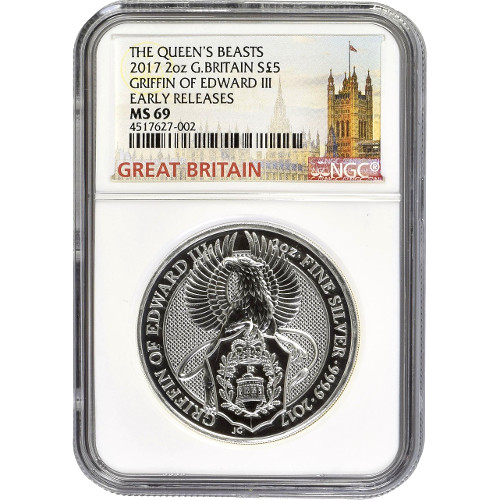 The second release of the Queen’s Beast Collection has arrived, and it features one of the most powerful creatures of the human imagination. Half-lion and half-eagle, the griffin was rumored to be the most powerful animal in the world. A symbol of Edward III, the griffin appeared at the coronation of Queen Elizabeth II in 1953. Right now, the 2017 2 oz Silver British Queen’s Beast Griffin Coin is available with certification today online at Silver.com.

Each 2017 2 oz Silver British Queen’s Beast Griffin Coin in this listing has a near-perfect grade from the NGC. Coins with an MS69 grade feature full, original mint luster, but do have flaws. Those flaws are limited to a maximum of two minor flaws and are found only outside of the primary focal areas on the coin’s surface.

The Early Release designation is reserved for coins that are received for certification within a certain time window. Early Release coins must arrive at the NGC or an approved third-party location within the first 30 days of the release date set by the Royal Mint.

The reverse of all 2017 2 oz Silver British Queen’s Beast Griffin Coins features the image of a Griffin standing tall and proud, its wings fully outstretched over its head. It has its front paws up on a shield, and includes engravings of the weight, metal content, purity, and year of issue.

If you have any questions, please don’t hesitate to ask. Silver.com associates are available at 888-989-7223, online through our live web chat, or via our email address.