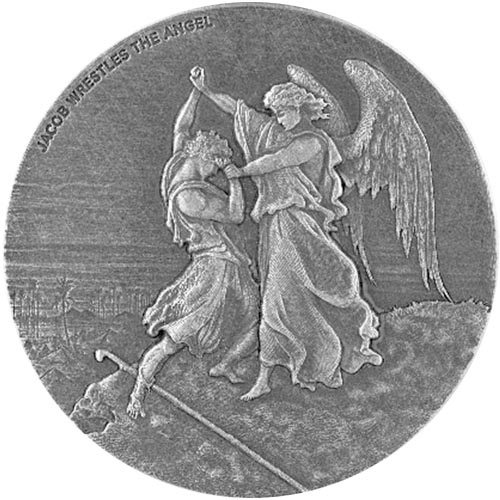 Many events from the Bible are interpreted differently between those of the Jewish faith and those of Christian faith. Even those among the Christian faith have different interpretations of what occurs in some gospel stories. One of the most interesting is the account of Jacob wrestling an angel. Right now, the 2017 2 oz Silver Jacob Wrestles the Angel Biblical Coin is available to purchase online at Silver.com.

Each of the 2017 2 oz Silver Jacob Wrestles the Angel Biblical Coins ships inside of a Bible-themed box for perfect display in your collection. The included Certificate of Authenticity has a serial number that matches the laser-engraved production number found on the edge lettering of each individual coin.

The account of Jacob wrestling the angel is recorded in the earliest books of the bible, specifically in Genesis 32:22-32. Time has done little to clear the minds of theologians and biblical scholars when it comes to this story however, with the identity of Jacob’s opponent hotly debated. Up for consideration are a dream figure, a prophetic vision, an angel, a protective river spirit, Jesus, or even God.

Jewish interpretations of the clash have Jacob wrestling the guardian angel of his elder twin brother, or God. In either case, the hip injury Jacob suffers in the battle led to Jews being prohibited from eating the meat tendon attached to the hip socket. Christian’s Martin Luther and John Calvin both believed Jacob wrestled God, though Calvin believed it was merely a vision not an actual event.

In either case, the reverse of the 2017 2 oz Silver Jacob Wrestles the Angel Biblical Coin captures Gustave Dore’s depiction of Jacob as he has both hands locked with an angelic figure. Both appear to be wrestling for superiority, though neither has the upper hand.

On the obverse of the Silver Jacob Wrestles the Angel Biblical Coin is the image of Queen Elizabeth II. Her Majesty’s effigy on this coin comes from Raphael Maklouf in 1984. This third-generation depiction of the Queen was on circulation coinage from 1984 until 1997.

If you have any questions, please feel free to reach out to Silver.com. Our customer service team is available to you at 888-989-7223, online using our live web chat, and via our email address. Our full catalog of silver for sale is available to you online at all times!