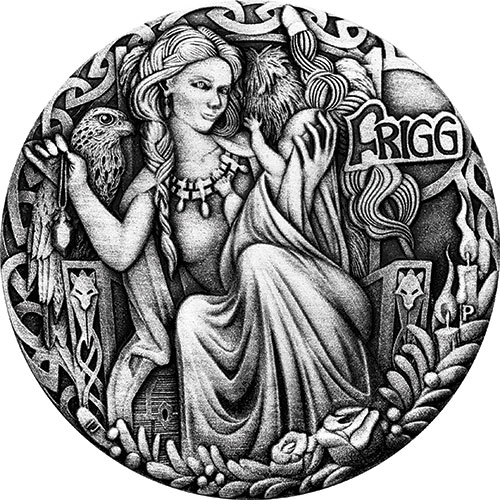 The Norse Goddesses Series of silver coins is a stunning high-relief striking that follows up the successful release in 2016 of a Norse Gods Series. Both offered by the Perth Mint, these coin programs featured the use of rimless blanks, antique polish, and high-relief coining to create coinage with an ancient appeal. The 2017 2 oz Silver Tuvalu Norse Goddesses Frigg High Relief Coin is yours to purchase today online at Silver.com.

The Perth Mint’s Norse Goddesses Series pulls out all the stops in terms of design and beauty. Each coin starts out as a rimless blank with an antique polish. The blanks are struck under high pressure to create the high-relief finish, which adds depth to the intricate details of the coin’s designs.

An antique polish is added individually to each coin to give them an ancient appearance, and the rimless nature of the blanks reinforces that visual effect by mimicking the visual appearance of ancient coinage.

In Norse mythology, Frigg filled many roles. Like their counterparts in Roman and Greek mythology, Norse gods and goddesses often had one primary attribute associated with them, as well as several minor characteristics. Frigg is known as the goddess of love and marriage, but also a controller of destiny as she possesses the power to weave the threads of fate.

The obverse of the Norse Goddesses Series coins from Perth Mint feature Queen Elizabeth II’s effigy. Captured in right-profile relief by Ian Rank-Broadley, this fourth-generation image was designed in 1998 for British and commonwealth currency.

On the reverse of the 2017 2 oz Silver Tuvalu Norse Goddesses Frigg High Relief Coin is the intricate detail of the Frigg design. It includes an image of Frigg as she sits in the high seat of Odin. She is depicted holding a newborn child in one arm with a falcon, white candles, and woven threads adorning the background.

Perth Mint was founded in Australia in 1899 during British rule as the third and final Royal Mint facility. Today, it is the oldest operating mint in the nation and is owned by the state government of Western Australia.

We encourage Silver.com customers to contact us with questions. Our associates are available at 888-989-7223, online using our live chat, and through our email address. Don’t forget, you can find the current price of silver updated on our site throughout the day!