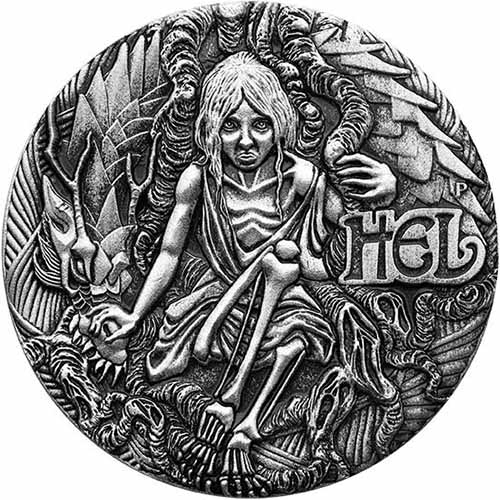 The Norse Goddesses Series of high-relief silver coins from the Perth Mint is an exciting follow-up release to its 2016 program of Norse Gods coins. Both series feature rimless blanks with an antique polish, with each feature combining to create a sense of antique currency to these brilliant silver coins. Right now, 2017 2 oz Silver Tuvalu Norse Goddesses Hel High Relief Coins are available to purchase online at Silver.com.

The 2017 2 oz Silver Tuvalu Norse Goddesses Hel Coin is struck in high relief on a rimless blank. The coins have greater depth of detail courtesy of the high relief striking, and the rimless blanks are individually polished for an antique, heirloom appeal.

Hel is the Norse goddesses of the underworld, or world of the dead. Interestingly, in Old Norse her name translates to “hidden,” and likely refers to the fact that the underworld itself and the dead who reside there are hidden (buried) beneath the ground. Hel is often depicted as being greedy, harsh, and cruel.

The reverse of all 2017 2 oz Silver Tuvalu Norse Goddesses Hel Coins features the uniquely designed image of Hel. She was assigned to be guardian of the underworld by Odin himself, and is referred to as the daughter of Loki.

On the obverse of all coins in this collection is the right-profile portrait of Queen Elizabeth II. Her Majesty’s effigy has appeared on all British and commonwealth coinage since her ascension to the throne in 1952, and this fourth-generation depiction comes from Ian Rank-Broadley in 1998.

If you have any questions, please contact Silver.com. Our customer service team is available at 888-989-7223, online using our live chat, and via our email address. The spot silver price is updated throughout the day on our homepage.