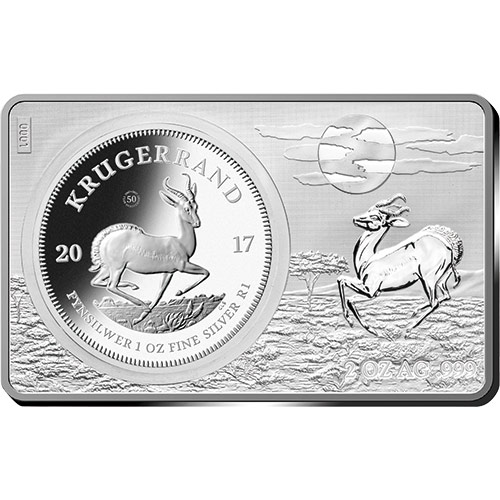 A moment 50 years in the making has finally arrived for numismatists around the world to savor. The South African Gold Krugerrand was the first private-investment gold bullion coin produced in the world, but while other mints offered gold bullion programs with a matching silver coin, the South African Mint never expanded the Krugerrand. There’s now a new Silver Krugerrand coin available, and the 2017 3 oz 50th Anniversary Silver South African Krugerrand Bar celebrates the occasion, and is available today on Silver.com.

With this unique silver bar for sale, you get a Silver Krugerrand coin that sits neatly inside a 2 oz silver bar that features the image of a Springbok antelope leaping across the prairies of South Africa as a cluster of clouds floats in front of the sun. The obverse allows you to see the obverse of the Silver Krugerrand as well, along with a herd of antelopes standing on the plains and engravings of “1967 – 2017” and “50th Anniversary.”

If you have any questions, please feel free to contact Silver.com. We’re available at 888-989-7223, on the web using our live chat, and via our email address.