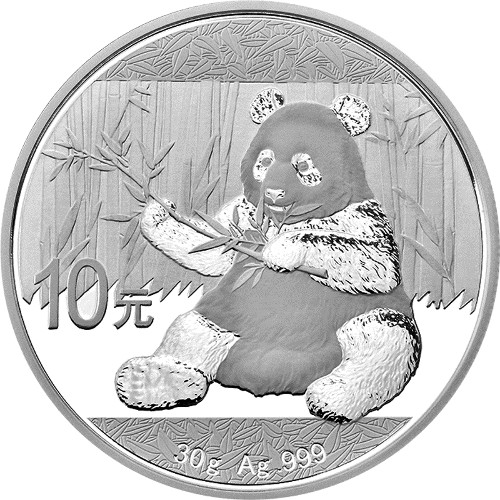 The giant panda is a common symbol for the country of China. These creatures are known for their black and white pattern and their soft features. Pandas are native to south-central China and are always featured on the bullion coin series from the Chinese Mint. Now, you can purchase the 2017 30 Gram Silver Chinese Panda Coin at Silver.com.

Every year, the Chinese Mint puts a different design on the obverse side of its Panda Coins, with the exception of the 2001 and 2002 coins which have the same design.

On the obverse of each 2017 30 Gram Silver Chinese Panda Coin, you will see the image of a giant panda holding a branch of bamboo while eating the leaves off one at a time. The panda sits in front of a wall of bamboo. Also on this side of the coin, you will see the coin’s face value, weight and purity.

The reverse of each of these coins shows an image of the Temple of Heaven, which is a building that is part of a larger religious complex in China. On this side of the coin, you will see the year of issue and “People’s Republic of China” written in Mandarin.

All of the coins in this listing are in Brilliant Uncirculated condition. All coins in BU condition won’t have any signs of wear and tear, but they may have some minor flaws. These flaws could include breaks in the luster, spotted surfaces or contact marks created during the coining process.

The Chinese Mint actually has a number of locations across the country, but since none of them use mint marks, you can never tell where individual coins were minted.

Please feel free to reach out to Silver.com with your questions. You can contact one of our associates at 888-989-7223, online using our live web chat, or via email.