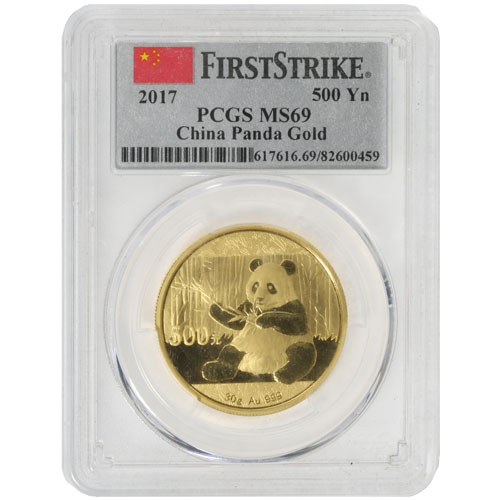 The Gold Panda Coins from the Chinese Mint are among the more diverse and popular options with investors each year. New reverse designs of the Giant Panda give the coin a collectible twist and the production of five weights per year offers something in the series for everyone buying gold. Now, 2017 30 Gram Gold Chinese Pandas are available to you for purchase online at Silver.com in near-perfect condition.

The Chinese Mint introduced the 30 Gram Gold Chinese Panda coin in 1982 as the 1 oz Gold Chinese Panda. The coin was issued that first year alongside four fractional-ounce versions, with a fifth fractional-ounce coin added in 1983. In 2001, the Chinese Mint adjusted the face value of all coins in the series up, with the 1 oz/30 Gram coin moving from 100 Yuan to 500 Yuan.

In 2016, an even bigger change came to the series with the shift away from Troy ounces as the official unit of measure for the coins. The 1 oz gold coin became the 30 Gram gold coin, with the other fractional-ounce coins shifting to 15 Gram, 8 Gram, 3 Gram, and 1 Gram weights, respectively.

The obverse face of the 2017 30 Gram Gold Chinese Pandas features the same design that has always been in place on this side of the coins. The Gold Panda obverse includes a vision of the exterior façade of the Hall of Prayer for Abundant Harvests. This is the central structure in the Taoist religious complex known as the Temple of Heaven.

On the reverse side of 2017 30 Gram Gold Pandas is a design that you will only find available on this date mark. In this design element, a Giant Panda is depicted seated on its backside in front-facing relief as it dines on some bamboo.

These 2017 30 Gram Gold Chinese Pandas earned near-perfect MS69 certifications. A Mint state 69 coin showcases full, original mint luster with a maximum of two minor detracting flaws. Acceptable flaws at this level include only minuscule contact marks or hairlines. The First Strike label included with these coins indicates each one was received within 30 days of the Chinese Mint’s initial release of the coins.

Silver.com customer service is available to you at 888-989-7223. You can also chat with us live online or send us an email with your inquiries.