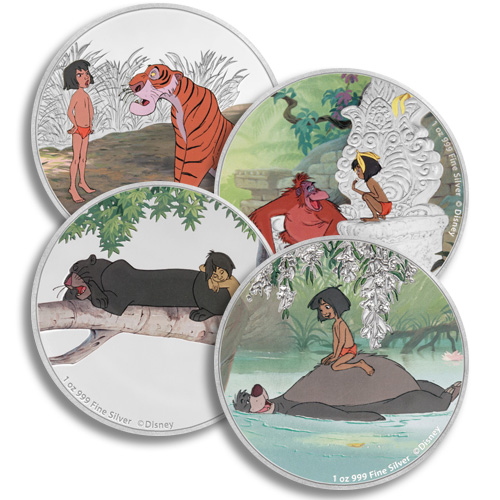 The 2017 release year at the New Zealand Mint was used to celebrate the 50th anniversary of the classic Disney animated film The Jungle Book. Adapted from the 1894 book of the same name from Rudyard Kipling, the film was an instant hit and has been reimagined by Disney in recent years in a live-action version of the film. Right now, 2017 4 oz Silver Niue Disney Jungle Book 4-Coin Sets are available to purchase online at Silver.com.

Each 2017 4 oz Silver Niue Disney Jungle Book 4-Coin Set in this product listing is available to you with a total of four 2017-dated silver coins. Each coin is individually encapsulated and presented within a storybook-style display box that has an embossed cover reminiscent of the care and quality that would have been put into the production of Rudyard Kipling’s original written releases in the 19th century.

The set includes a total of four coins. The one common element to the reverse designs for each coin is the inclusion of the man-cub Mowgli. Considered the focus of the film, he was not alone in appearing heavily throughout the original work of art or the Disney animated film from 1967. The 2017 issue of these coins celebrated 50 years since the release of the original Disney animated version of the film.

On the reverse of the individual 2017 Silver Niue Disney Jungle Book Coins are images of the lovable bear Baloo, who is Mowgli’s friend, the tiger Shere Kahn, King Louie the orangutan, and Bagheera the leopard. Each reverse design includes colorized finishes that bring the scenes to life as originally featured in the Disney film.

The obverse of 2017 4 oz Silver Niue Disney Jungle Book Coins includes the effigy of Queen Elizabeth II. Her Majesty has served as Queen of England and ruler of the Commonwealth since 1952. This is the fourth-generation portrait from British coinage and was created in 1998 by Ian Rank-Broadley.

If you have any questions about silver for sale, please call Silver.com. Our customer service team is available at 888-989-7223, online through our live chat, and via our email address.