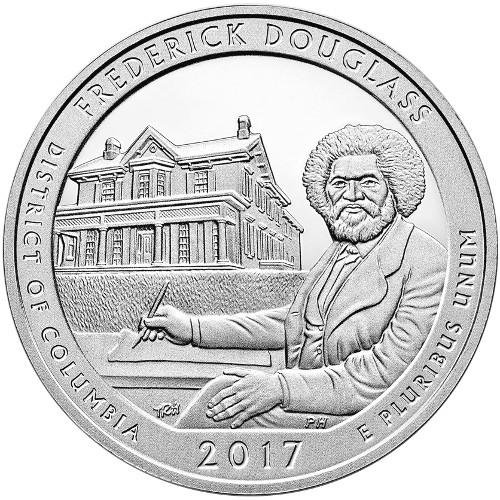 The America the Beautiful Series of silver coins from the United States Mint are hot sellers on an annual basis, with five new releases each year and a total of 56 coins planned when the program is all said and done. Right now, the 2017 5 oz ATB Silver Frederick Douglass National Historic Site Coin is available to purchase online at Silver.com.

Each 2017 5 oz ATB Silver Frederick Douglass National Historic Site Coin listed here is in BU condition. Coins in this condition have no signs of wear and tear, however you may notice minor flaws in its appearance that range from breaks in the luster and spotted surfaces to the presence of contact marks from striking blanks during the production process.

For the America the Beautiful Series of silver coins, the United States Mint, Treasury Department, and the Secretary of the Treasury collaborated with citizen advisory committees to make selections for representative national monuments, parks, and forests from each of the 50 states, five overseas territories, and the District of Columbia.

The obverse of the ATB Silver Coins from the US Mint features the profile of President George Washington. Just as it appears on the circulation quarter, this left-profile effigy was created in 1932 by John Flanagan.

All America the Beautiful Silver Coins are struck in uncirculated and proof versions by the United States Mint. The Denver Mint and Philadelphia Mint locations handle the production of all these coins within the US Mint system on an annual basis.

If you have any questions, please don’t hesitate to ask. Silver.com customer service team members are available on the phone at 888-989-7223, online using our live web chat feature, and via our email address.