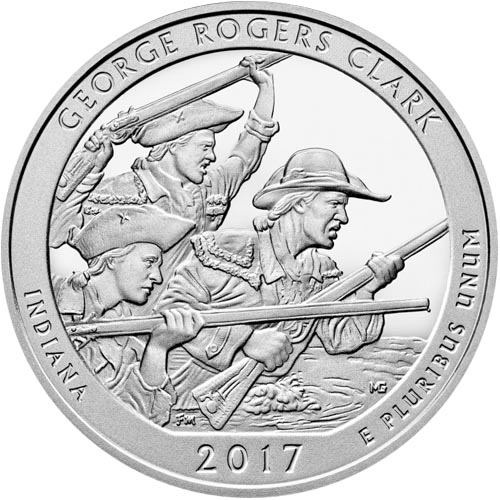 The America the Beautiful collection of silver coins from the United States Mint is one of its most coveted collectible programs. There are five new releases each year and the program is scheduled to run through 2021, with the potential for the Secretary of the Treasury to expand the program through 2033. Right now, the 2017 5 oz ATB Silver George Rogers Clark National Historical Park Coin is available online from Silver.com.

Each 2017 5 oz ATB Silver George Rogers Clark National Historical Park Coin in this listing is in BU condition. Coins in this condition have no signs of wear and tear, however you may notice minor flaws including breaks in the luster, spotted surfaces, and contact marks from the production process.

Located in Vincennes, Indiana, the site now known as George Rogers Clark National Historical Park was originally the site was a trading post established by Sieur Juchereau, Lieutenant General of Montreal in 1702. It was renamed Fort Sackville in 1766 by British Lt. John Ramsey after he took control of the settlement and built up the fort in the name of George Germain, Lord Sackville.

The obverse of all ATB Silver Coins includes the left-profile portrait of President George Washington, which was created in 1932 by John Flanagan. This effigy remains in use on American circulation quarters today as the longest running coin design in US history.

On the reverse of the 2017 5 oz ATB Silver George Rogers Clark National Historical Park Coin is the image of frontiersmen under the direction of Lt. Col. Rogers Clark as they charge the British positions. His march from the Mississippi River in mid-winter to defeat the British at Fort Sackville remains one of the great feats of the American Revolutionary War.

All America the Beautiful coins are produced annually by the United States Mint with uncirculated and proof specimens available for investors and collectors. These coins are either produced by the Denver Mint facility or the Philadelphia Mint location.

If you have any questions, please feel free to reach out to Silver.com. Our customer service team is available to you on the phone at 888-989-7223, online using our live web chat, and via our email address.