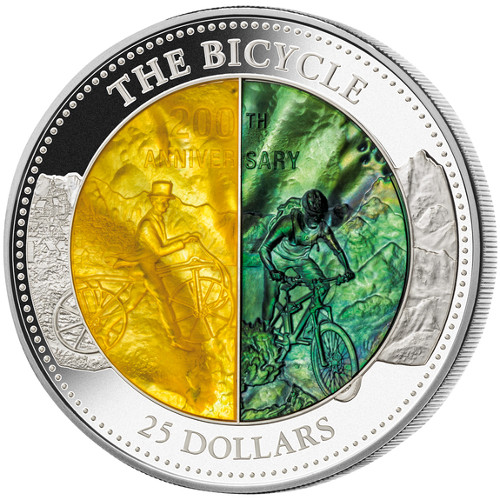 The bicycle offered one of the first major advancements away from horse-and-buggy transportation in the world. Although the wheel had existed for thousands of years already, it wasn’t until 200 years ago that the first bicycle was invented, and would be another 100 years before they were popular among all classes of society. Right now, the 2017 5 oz Proof Silver Cook Islands Mother of Pearl Bicycle Coin is available to purchase online at Silver.com.

With your purchase of a 2017 5 oz Proof Silver Cook Islands Mother of Pearl Bicycle Coin you’ll receive the coin inside of a circular, wooden box with a 200th anniversary theme for the bicycle that includes wheel spokes. There is an individual Certificate of Authenticity available with each coin.

2017 marks the 200th anniversary of the bicycle. To date, there have been more than 1 billion bicycles produced in the last two centuries, which is more than double the number of automobiles that have been produced around the world. Bicycles were developed by a German man named Baron Karl von Drais, and was introduced to the public in Mannheim in the summer of 1817, and one year later in Paris.

The obverse of the Mother of Pearl Bicycle Coin includes the right-profile portrait of Queen Elizabeth II. Created in 1998 by Ian Rank-Broadley, this fourth-generation depiction of the Queen is the current effigy in use on British, Australian, and other commonwealth nations’ coins.

If you have any questions, please feel free to contact Silver.com. Our customer service team is available to answer questions on the phone at 888-989-7223, on the web using our live chat feature, and via our email address. You can also visit our website at any time to research the spot silver price.