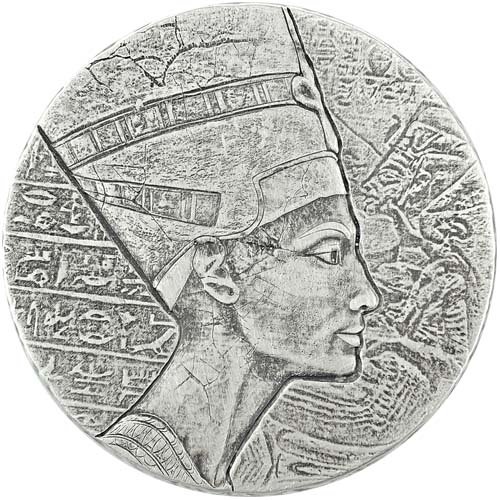 Queen Nefertiti is unquestionably the most well-known female from the Ancient Egyptian era. The wife of Pharaoh Akhenaten and Queen of Egypt, Nefertiti’s figure was long regarded as a symbol of beauty around the world. Now, her figure appears on the obverse of the first release in the Republic of Chad Egyptian Relic Series. Today, 2017 5 oz Silver Republic of Chad Egyptian Relic Series Queen Nefertiti Coins are available to you online at Silver.com.

All of the coins to follow in the Egyptian Relic Series from Scottsdale Mint will have the same stunning design elements and physical features of the Queen Nefertiti release. Each coin is designed to appear as though it is actual ancient currency used for thousands of years. This is accomplished through a variety of finishing touches.

First, each coin has a chiseled appearance to the thick outer edge of the 5 oz silver coins. Second, the Silver Queen Nefertiti Coin is available with an antique polish that is hand applied to give the coins enhanced detail on the intricate elements of the design. Last but not least, the coins have an incuse design setting that sinks each design feature into the coin’s surface, rather than raised above.

Your 2017 5 oz Silver Republic of Chad Egyptian Relic Series Queen Nefertiti Coin is available in BU condition. Coins in this condition show no signs of wear and tear, but flaws from the production process are possible. These range from breaks in the luster and spotted surfaces to contact marks.

On the reverse of all 2017 Silver Queen Nefertiti Coins is the national crest for the Republic of Chad. A large, landlocked country in Africa, the crest features a lion and goat on either side, with engravings of the nation of issue, face value, and the coin’s weight, purity, and metal content.

The obverse of the 2017 5 oz Silver Republic of Chad Queen Nefertiti Coin includes the image of Nefertiti. Depicted in right-profile relief and accompanied by Egyptian hieroglyphs, the design captures the beauty of Nefertiti, who together with her husband ruled over Ancient Egyptians most prosperous period of time.

Please feel free to contact Silver.com with questions. You can call us at 888-989-7223, chat with us live online, or simply send us an email with your inquiries. Don’t forget to look for silver prices today on our homepage!