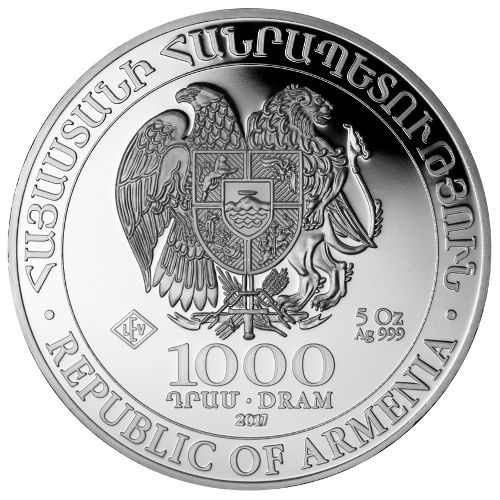 The Book of Genesis in the Christian bible tells of a flood so epic that it wiped out all human civilization. Only a man named Noah and his family survived, together with two of every animal in the world, on a wooden ark to repopulate the planet after. This is captured in its full beauty on the Silver Armenian Noah’s Ark Coin, the official silver bullion coin of the nation of Armenian. The 2017 5 oz Silver Armenian Noah’s Ark Coin is available to you online today at Silver.com.

These silver coins from Geiger Edelmetalle were introduced by the Central Bank of Armenia in 2011 with a one ounce, one-half ounce, and one-quarter ounce weight available for purchase. The program expanded to its current size the next year in 2012 with the addition of five ounce, 10 ounce, one kilo, and five kilo options.

Armenia is the traditional home of Mount Ararat, the resting place of Noah’s Ark in the book of Genesis in the Christian bible. The dividing line between Armenia and Turkey once ran directly over the top of Mount Ararat. It is said that Noah’s ark came to a rest on the Armenian side of this border, giving the nation a close connection to the story and reason to use its depiction on the nation’s official silver bullion coin.

On the obverse of the Silver Armenian Noah’s Ark coin is the coat of arms for the nation of Armenia. The heraldic shield features a small depiction of Noah’s ark resting on the sides of Mount Ararat in the center of the shield, with an eagle on the left of the shield and a lion on the right.

The reverse of all 2017 5 oz Silver Armenian Noah’s Ark coins includes the full-scale depiction of the ark as it floats atop the receding flood waters. A dove is depicted in the foreground with an olive branch in its beak, a symbol that the waters were receding and Noah’s family’s ordeal was near an end.

All 2017 5 oz Silver Armenian Noah’s Ark Coins in this listing are in BU condition. Coins in BU condition show no signs of wear and tear, however you may notice minor flaws ranging from breaks in the luster and spotted surfaces to contact marks.

We encourage all Silver.com shoppers to contact us at 888-989-7223 with questions. You can also email us, or visit our website to live chat with us or check the spot silver price for today.