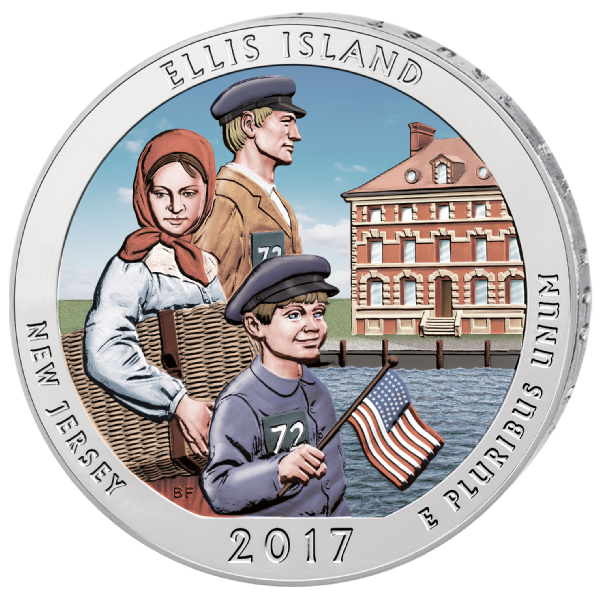 The America the Beautiful Series from the United States Mint has delivered iconic scenery and landmarks to silver bullion fans since 2010, but none of its imagery has been quite as powerful as the 2017 Ellis Island National Monument Statue of Liberty Coin. For a nation of immigrants, this location marks the landing point for millions of souls in search of a better life. Right now, the 2017 5 oz Colorized Silver ATB Ellis Island National Monument Statue of Liberty Coin is available to purchase online at Silver.com.

All 2017 5 oz Colorized Silver ATB Ellis Island National Monument Statue of Liberty Coins in this listing are in BU condition. Coins in BU condition exhibit no signs of wear and tear, but you may notice minor flaws from the coining process. These include possible breaks in the luster, spotted surfaces, or contact marks.

Ellis Island and Liberty Island are managed by the National Park Service and located in Upper New York Bay between the states of New Jersey and New York. Between 1892 and 1954 alone, 12 million immigrants entered the United States through this port area. Ellis Island contained the processing building, with nearby Liberty Island featuring the towering Statue of Liberty as she greeted newcomers to this land.

The obverse of all ATB Series Silver Coins features a portrait of the first President of the United States of America. George Washington’s left-profile portrait featured here was created in 1932 by John Flanagan for the US quarter, and is the longest running coin design in American history as it still graces the quarter today.

On the reverse of the 2017 5 oz Colorized Silver ATB Ellis Island National Monument Statue of Liberty Coin you’ll find the image of a family just arriving in America. Heading into the processing buildings on Ellis Island, they look up in awe at the Statue of Liberty as she provides a guiding light for those seeking a fresh start at life.

These colorized coins have color lacquer applied to the design sets of the reverse to bring the coin’s scenery to life. Only the reverse has colorization, and it was completed by Emporium Hamburg, a German third-party authorized dealer. The United States Mint does not colorize any of its coinage.