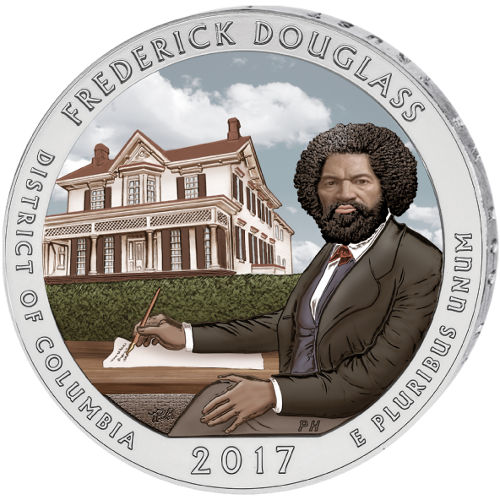 The America the Beautiful collection of silver coins from the United States Mint remains one of its most popular bullion releases each year, with only the Silver American Eagle surpassing it in terms of demand and popularity. Among the 2017 releases in the series is one coin commemorating one of the nation’s most significant civil rights leaders ever. Today, 2017 5 oz Colorized Silver ATB Frederick Douglass National Historic Site Coins are yours to purchase at Silver.com.

The United States Mint does not colorize any of its silver or gold bullion products. With the purchase of these 2017 5 oz Colorized Silver ATB Frederick Douglass National Historic Site Coins you receive a product that was originally struck by the US Mint, and colorized by Emporium Hamburg, an authorized third-party distributor in Germany.

Each 2017 5 oz Colorized Silver ATB coin in this Silver.com listing is in BU condition. Coins in this condition show no signs of wear and tear, however you may notice a range of minor flaws resulting from the production process. These commonly include breaks in the luster, spotted surfaces, or contact marks.

Frederick Douglass was born into slavery in the United States in 1818 in the state of Maryland. After escaping from slavery he became a well-known abolitionist, orator, writer, and statesman who spoke out in the North against the evils of slavery in the South.

On the obverse of all Silver ATB Coins you’ll find the left-profile portrait of President George Washington as found on all circulation quarters. This image was launched on the nation’s quarters in 1932 in honor of his 200th birthday and remains there today. It was created in 1932 by John Flanagan.

Please don’t hesitate to pick up the phone and call Silver.com at 888-989-7223 with your questions. We’re also available to you online through our live chat and email features.