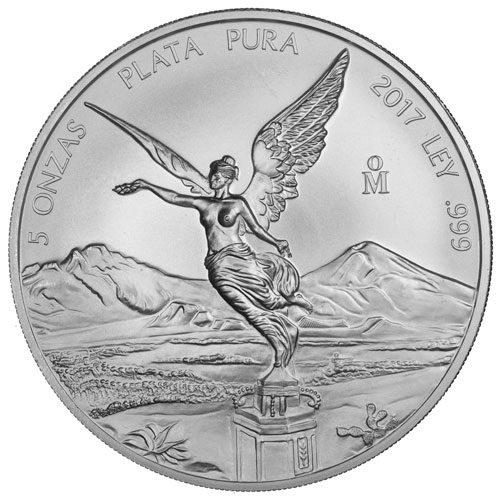 Mexico’s official silver bullion coin is known as the Silver Mexican Libertad. These coins are actually just one part of a much larger program that consists of gold, silver, and platinum coins in a variety of finishes ranging from bullion to proof and proof-like. Today, the 2017 5 oz Silver Mexican Libertad Coin is available to you online at Silver.com

The Silver Mexican Libertad is one of three versions of the Libertad coin which trace their history back to the gold Centenario coin from the Mexican Mint. Released in 1921, the Centenario marked the 100th anniversary of Mexico’s fight for independence from Spanish colonial rule.

Each 2017 5 oz Silver Mexican Libertad Coin in this product listing is available to you in BU condition. Coins in BU condition show no signs of wear and tear, though you may notice minor flaws ranging from breaks in the luster and spotted surfaces to contact marks from the production process at the mint.

Silver Libertad coins feature the same design on the obverse used on the original Centario coins. The statue of Winged Victory stands in the center of Mexico City, erected there in 1920 to commemorate the start of the fight for independence. Her image is representative to Mexican people of their battle for freedom.

On the obverse of the 2017 5 oz Silver Mexican Libertad coin you’ll find that image of Winged Victory situated in the center of the coin’s design field. Engravings include the weight, metal content, purity, and year of issue for the coins, along with the mint mark of the Mexican Mint.

Founded in 1535, the Mexican Mint is without question the oldest operating facility in the Western Hemisphere. Originally opened by Spanish conquistadors and used to strike coinage for Spanish colonies throughout the hemisphere, today it is the sovereign mint of the Mexican government and overseen by Banco de Mexico.

Please direct your questions regarding these coins to Silver.com. Our customer service team is available at 888-989-7223, online using our live chat, and via our email address. Don’t forget you can visit our website at any time to view the current price of silver!