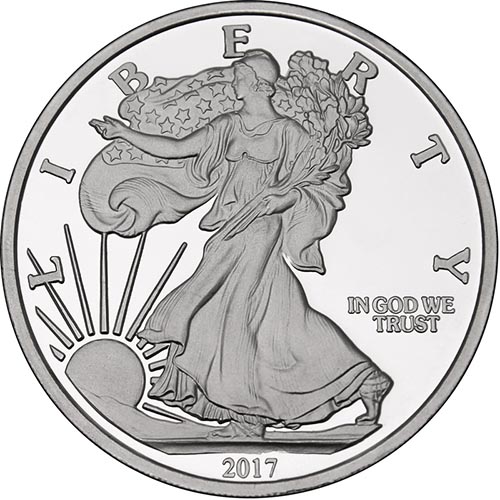 Each year the United States Mint releases the popular silver bullion coin of the United States, the Silver Eagle. At an American private minting facility, SilverTowne Mint, the Walking Liberty design featured on Silver Eagle coins comes to life on a massive 5 oz silver round. With a new year of issue engraved each year, these rounds are a great investment-grade bullion option. Right now, 2017 5 oz SilverTowne Silver US Eagle Replica Rounds are available to purchase online at Silver.com.

SilverTowne Mint issues its US Eagle Replica Silver Rounds each year, updating the year of issue on it so you can collect and distinctly identify each new year’s release of the popular silver round. These investment-grade silver bullion rounds feature 5 oz of fine silver content and are available at much more affordable silver prices than sovereign bullion coins.

Adolph A. Weinman created the image of Walking Liberty to feature on the American half-dollar circulation coin. His 50-cent piece design was used on the coin from 1916 to 1947. Walking Liberty was preceded by the Barber coinage design series and eventually replaced with a portrait of Benjamin Franklin.

The obverse of all 2017 5 oz SilverTowne Silver US Eagle Replica Rounds includes that popular image of Walking Liberty from Weinman. Liberty is depicted on this round walking toward the setting sun, with engravings of the face of “Liberty,” the national motto “In God We Trust,” and the year of issue “2017.”

On the reverse of the SilverTowne Silver US Eagle Replica Round is the heraldic eagle of the United States. Modernized and refined by John Mercanti, former US Mint Chief Engraver, this version of the shield was completed in 1986 by Mercanti for the Silver American Eagle coin series.

Mercanti’s modernization of the design is the latest in the 225-year minting history of the US Mint. The original heraldic eagle design was created in 1794 by Robert Scot, the first Chief Engraver of the United States Mint. His original design was heavily criticized by the public for depicting too scrawny a version of the bald eagle.

SilverTowne Mint is a private refining operation located in Winchester, Indiana. Since 1973 it has met the Highest Quality Standards for its silver bullion production, but its history goes back to humble origins in 1949 as a coin shop in rural Indiana.