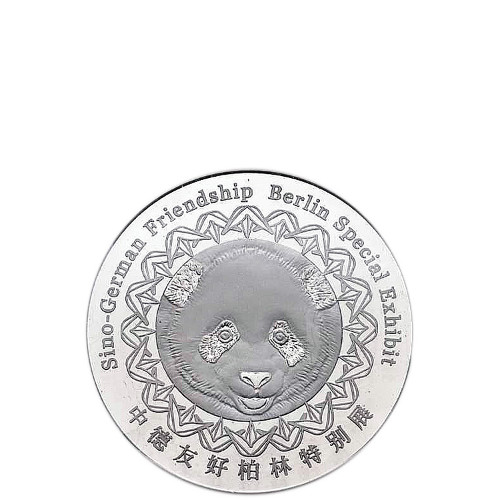 Silver Chinese Panda coins have experienced a surge in popularity in recent years, with the coin’s gaining greater notoriety as the explosion of precious metal bullion coins has taken place. One of the longest running silver bullion coin programs in the world, the Silver Chinese Panda is now available with new weight markings that set it apart in the industry. Right now, the 2017 8 Gram World Money Fair Silver Commemorative Panda Round is available to purchase online at Silver.com.

Chinese Panda silver bullion products available at the World Money Fair in 2017 include the 1 oz round offered since 1984, and the all-new 8 Gram World Money Fair Silver Commemorative Panda Round. Also included in this year’s release is a 1 oz gold panda round as well. Mintage figures are set at 1,000 units for both silver products, and reportedly just 20 for the gold round.

The reverse of all 2017 8 Gram World Money Fair silver Commemorative Panda Rounds includes the image of the German Parliament building, along with Berlin’s famous TV tower in the background and the official logo of the World Money Fair. There are also engravings in both English and Chinese.

On the obverse is the image of a Giant Panda, but unlike many of the silver bullion coins from the Chinese Mint, this particular design includes only the face and head of the panda. Engravings include “Sino-German Friendship” and “Berlin Special Exhibit,” along with those same engravings in Mandarin Chinese.

The Chinese Mint is operated by a private company under the oversight and authority of the People’s Bank of China. Silver Panda coins are minted at various facilities, but lack mint marks to identify their specific origin.

If you have any questions, please don’t hesitate to ask. Silver.com customer service is available at 888-989-7223, online using our live chat, and via our email address. You can also visit our homepage to find the current price of silver.