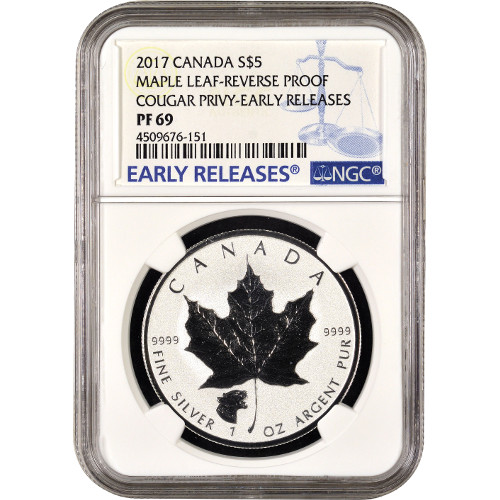 The Wild Canada Series of privy mark Silver Canadian Maple Leaf coins debuted in 2016, and the limited-issue coins quickly sold out at both the Royal Canadian Mint and most authorized dealers in North America. Now’s your chance to act and capture the next design in the series with the release of the 2017 Cougar Privy Silver Canadian Maple Leaf Reverse Proof Coin, available in near-perfect condition on Silver.com.

Coins in the Canadian Wildlife Series proved immensely popular. Each new release in that six-coin series featured a different native species of Canada or North America at large. The third release featured the cougar, one of nature’s deadliest, silent killers.

For the Wild Canada Series, these popular creatures return in the same order as privy mark designs on the Silver Canadian Maple Leaf coins. The Wild Canada Series started in 2016 with the wolf, continuing on with the grizzly bear. The cougar again appears third in the release schedule, and will be followed in 2017 by the moose, with the 2018 coins feature an antelope and wood bison privy mark.

Each 2017 Cougar Privy Silver Canadian Maple Leaf Reverse Proof coin listed on Silver.com is a PF69 specimen according to the NGC. Coins with this grade still have full, original mint luster and exhibit a maximum of just two minor detracting flaws. Early Release specimens are those coins that arrive at the NGC or an approved depository for certification within the initial 30 days of the release date.

Reverse proof coins have a stunning finish not often found on commemorative coins. Flipping the regular proof finish, these have a strong, frosted background that is offset beautifully by the clear, mirrored finish of the design set.

On the reverse side of each 2017 Cougar Privy Silver Canadian Maple Leaf Reverse Proof coin you’ll find the sugar maple leaf, the official emblem of Canada. Set in the center, the maple leaf dominates the field, with the cougar privy mark featured below it to the left.

The obverse of all Silver Canadian Maple Leaf coins includes the image of Queen Elizabeth II. Her Majesty’s portrait is in right-profile relief and was created by Susanna Blunt in 2003 for use on all Canadian coinage.

We encourage Silver.com shoppers to contact us with questions. You can reach our customer service team at 888-989-7223, online using our live chat, and via our email address.