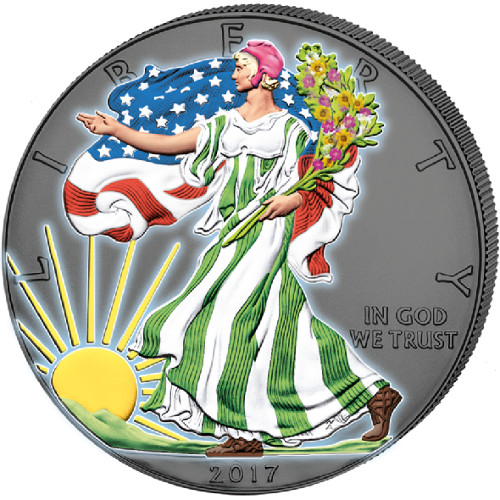 Silver American Eagle coins are a favorite among both precious metal investors and collectors. While the proof and burnished versions are a top choice for many, there are some numismatists that like to add unique options to their personal collection. If you are looking to buy silver that is unique, the Four Seasons Coin Set is a great choice! Right now, the 2017 Silver American Eagle Out of the Dark Four Seasons Coin Set is available to purchase online at Silver.com.

Each individual 2017 Silver American Eagle in the Out of the Dark Four Seasons Coin Set is in BU condition. Coins in BU condition exhibit no signs of wear and tear, though you may notice minor flaws such as breaks in the luster, spotted surfaces, or contact marks from the coining process.

These 2017 Silver American Eagle Out of the Dark Four Seasons Coins ship to you inside of a black display box that includes four lights situated over each of the individual coins in the display, giving it the Out of the Dark name. Included with your purchase is a Certificate of Authenticity.

The Four Seasons Coin set brings colorization to the individual coins that reflect her image throughout the changing seasons. Spring, summer, autumn, and winter are all reflected in the design.

Colorization varies from one coin to the next. For instance, the winter coin features a pale yellow sun in the lower left with snow-capped hills in the far distance at her feet, and Liberty is draped in a dark green dress. The summer coin, but contrast, has warm hues of red and gold in her dress, with a rich, yellow sun and lush green hills.

On the obverse of the 2017 Silver American Eagle coin is the image of Walking Liberty, created in 1916 by Adolph A. Weinman as a symbol of America’s continued march toward a brighter future.

The reverse of all Silver American Eagle coins includes the Heraldic Eagle of the United States. First used on the coins coming from the first striking of US coinage in 1794 at the Philadelphia Mint, this image has been updated continuously through American history. This version was modified by John Mercanti, Chief Engraver of the United States Mint from 1986 to 2010.

If you have any questions, please feel free to contact Silver.com. Our customer service team is available at 888-989-7223, on the web using our live chat, and via our email address.