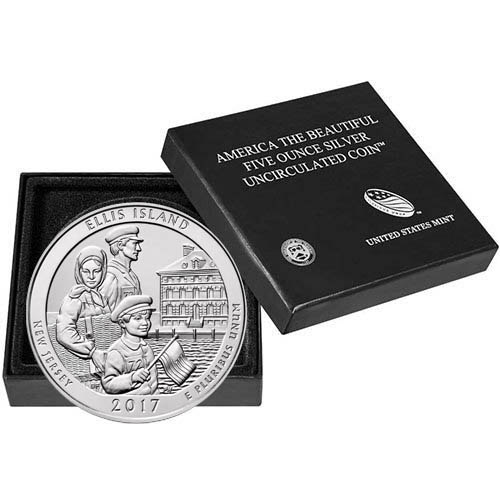 America the Beautiful silver bullion coins are available to investors and collectors across the course of 56-coin series. Each distinctive release represents one of the 50 US states, five overseas territories, and the federal district of the United States of America. 2017-P 5 oz Burnished Silver ATB Ellis Island National Monument Statue of Liberty Coins are available to you right now for purchase online at Silver.com.

Ellis Island is located in New York Harbor and is federally owned land within the states of New York and New Jersey. The site contains a museum and the former immigration inspection statue that was the busiest point of entry for immigrants to the United States from 1892 to 1954. Nearly 12 million immigrants are believed to have been processed at the facility over more than 60 years.

Nearby in the New York Harbor is the symbol of freedom and justice that often drew immigrants to the United States at the turn of the 20th century. Just as the nation was emerging on the international stage as a power, Lady Liberty was gaining a reputation as a symbol of the light of freedom offered by the nation.

On the reverse of 2017-P Burnished Silver ATB Ellis Island National Monument Statue of Liberty Coins is the image of an immigrant family approaching the processing center on Ellis Island.

The obverse of the 2017 Burnished Silver ATB Ellis Island National Monument Statue of Liberty Coins bears the left-profile portrait of President George Washington. The nation’s first president is depicted in the same portrait John Flanagan created in 1932 for use on the circulating quarter.

These 2017-P Burnished Silver ATB Ellis Island National Monument Statue of Liberty Coins come with a United States Mint presentation box and a Certificate of Authenticity. These coins have a “P” mint mark from the Philadelphia Mint on the obverse of the coin below “In God We Trust.”

We encourage Silver.com customers to call us with questions at 888-989-7223. You can also connect with our customer service team online through our live chat and email address features.