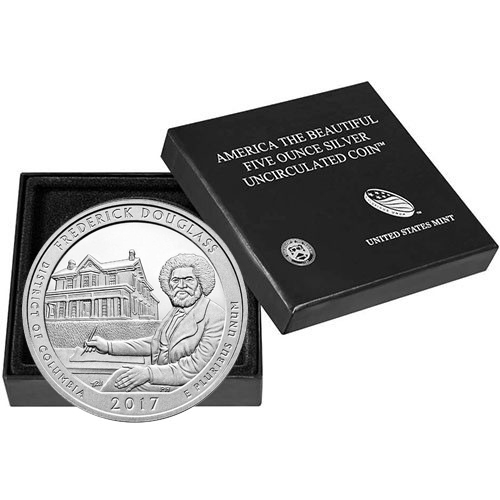 Frederick Douglass was arguably the most prominent African-American of the 19th century. He escaped slavery in Maryland and lived out most of his life in Massachusetts and New York as an outspoken opponent of slavery in the American South. His home outside of Washington DC has been preserved as a historic site for the nation. Right now, 2017-P 5 oz Burnished Silver ATB Frederick Douglass National Historic Site Coins are available to purchase online at Silver.com.

Each of the 2017-P Burnished Silver ATB Frederick Douglass National Historic Site Coins in this listing comes to you with a United States Mint display box and Certificate of Authenticity. The US Mint uses mint marks on its Burnished ATB Coins. Each one is struck by the Philadelphia Mint and thus bears a “P” mint mark on the obverse side of the coin below the national motto of “In God We Trust.”

Burnished ATB Silver Coins have a distinct visual brilliance that separates them from the mass-produced bullion versions of the ATB coinage. The burnished coins are struck slowly with high pressure to help the designs better stand out from the background field. To finish the work, the mint vapor blasts the coins for a matte finish that separates them from the shinier appearance of the silver bullion coins.

On the reverse side of the 2017-P 5 oz Burnished Silver ATB Frederick Douglass National Historic Site are two prominent images. In the foreground, you’ll find Frederick Douglass sitting at his writing desk. Douglass was a gifted orator and spoke of the evils of slavery and the necessity of its end in American culture. In the background is his home at Cedar Hill. The site offers sweeping views of the US Capitol and Washington DC.

The obverse of all 2017 Burnished ATB Silver Coins features the left-profile portrait of President George Washington. This design was refined in 1932 by John Flanagan for the US quarter and based upon a 1786 bust of Washington by William Cousins.