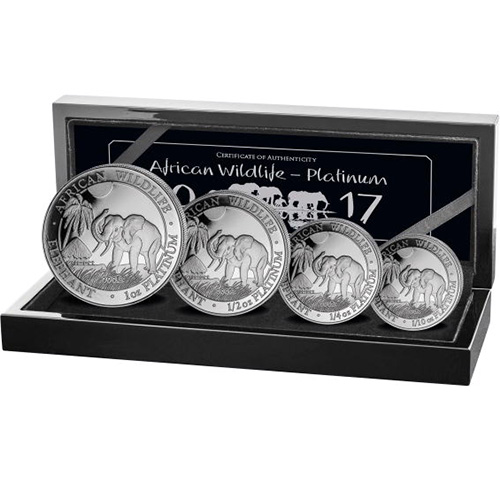 Commonly referred to as the African Wildlife Series, the Somalian Elephant coins are one of the hottest sellers in the precious metals market today. What started as a silver coin series in 1999 has blossomed into one that now includes fractional silver coins, gold coins, and as of 2016, a platinum coin as well. The 2017 Platinum Somalian Elephant Proof Coin Set is yours to purchase today online at Silver.com.

Since changing over to Somalia as the nation of issue, the coin series has steadily made gains among precious metal investors and collectors. The series has branched out to include silver and gold coins in both bullion and proof versions. The silver collection recently expanded immensely to feature fractional-weights, more fractional-weights and larger-weight coins were added to the gold series, and in 2016 the first-ever Platinum Elephant was introduced.

On the obverse of all 2017 Platinum Somalian Elephant coins you’ll find the latest design in the series. It depicts a massive elephant standing in front of a thatched-roof hut on the African plains, with the sun rising overhead in the background.

The reverse of all Somalian Elephant Coins includes the coat of arms for Somalia. The coin’s year of issue, face value, and nation of issue are all engraved on this side of the coin. Somalia’s coat of arms features a single star against a shield with horizontal stripes on the background.

We encourage all Silver.com customers to call us with questions. We’re available at 888-989-7223, online through our live web chat, and you can also send us your questions in writing via our email address.