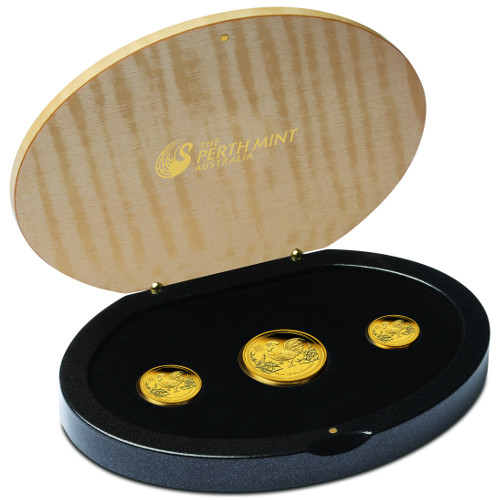 In this 2017 Proof Gold Australian Rooster 3-Coin set you’ll get all three weights struck by the Perth Mint for this tenth release of Lunar Series II. The popular 1 oz, ¼ oz, and 1/10 oz coins are all featured in this three-coin set, and ship together in one Perth Mint box.

The coins are contained inside individual slips in an oval-shaped box, with a black, glossy finish and timber-themed lid. Each box of three coins is sent to you inside of a Lunar Series II-themed shipper with full-color Year of the Rooster artwork, and a Certificate of Authenticity is also included.

Perth Mint established very low mintage figures for all three coins in total. The maximum allowed mintage for the 1 oz coin was 6,000, while the two fractional weights had a ceiling of 8,000 coins. However, just 1,500 of these popular coins were set aside for the 2017 Proof Gold Rooster 3-Coin Set.

On the reverse of all 2017 Proof Gold Australian Rooster 3-Coin Sets is the image of a single rooster. It is surrounded by engravings of “Year of the Rooster,” the Perth Mint’s “P” mint mark, and the Chinese symbol for rooster.

Flip the coins over and you’ll find the popular right-profile portrait of Queen Elizabeth II. England’s longest-reigning monarch has had her image updated five times now for commonwealth coinage, but this particular image is Ian Rank-Broaldey’s 1998, fourth-generation depiction. It has featured on all Lunar Series II coins and will continue to do so to maintain the integrity of reverse design schemes.

Perth Mint is Australia’s oldest operating facility, though not the official sovereign mint. Once a part of the British Royal Mint system along with the Sydney Mint and Melbourne Mint, today it is a state-owned entity of Western Australia and exists separate of the Royal Australian Mint.

We encourage you to ask our customer service team questions when they arise. Silver.com associates are available at 888-989-7223, online using our live chat, and via our email address. To see similar products, check out our full selection of Perth Mint Gold Coins.