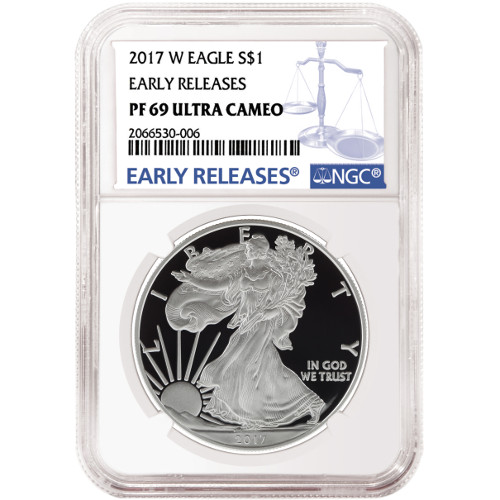 The Proof Silver Eagle is arguably one of the most popular individual products from the United States Mint. Part of the American Eagle series, these collectible silver coins catch the eyes of collectors looking to buy silver with beautiful designs each year. The 2017-W 1 oz Proof Silver American Eagle is available to you now online at Silver.com with NGC certification.

The Silver American Eagle debuted in 1986 with sales of 1.4 million proof coins. The Proof Silver American Eagle has never seen sales levels that high in the subsequent three decades, but there’s no doubting the continued popularity of the proof version of the Silver Eagle. In particular, certified coins sell quickly because of the added value of their certification.

On the obverse of each 2017 Proof Silver American Eagle certified coin is the image of Walking Liberty, which was originally created in 1916 by Adolph A. Weinman. Liberty is depicted walking toward the setting sun as a symbol of the nation’s drive toward a brighter future.

Each 2017 Proof Silver American Eagle coin available to you today is a near-perfect PF69 coin from the NGC. Coins with this grade have full, original mint luster, but also feature a maximum of two minor detracting flaws. These are often limited to miniscule hairlines or contact marks, and always located outside the primary focal area.

As an Early Release coin, these products arrived at the NGC or an approved third-party depository for certification within the first 30 days of the release date for 2017 Proof Silver American Eagle coins as set by the US Mint. The UCAM designation indicates a strong, frosted matte finish on the design features and a deeply-mirrored, clear background field.

We encourage all Silver.com customers to contact us at 888-989-7223 with questions. You can also chat with us live online or send us an email with your inquiries.