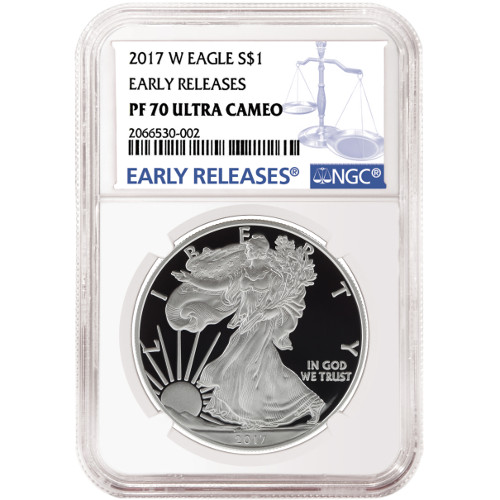 For those collectors seeking beauty of finish and stunning design features when buying silver, the Proof Silver American Eagle is one of the best options in the market. The collector’s version of the nation’s official bullion coin, the Silver Eagle features some of the nation’s most iconic images from its coinage history. Right now, the 2017-W 1 oz Proof Silver American Eagle Coin is available to purchase online at Silver.com with perfect certification.

All 2017 Proof Silver American Eagle coins offered in this product listing have a perfect grade from the NGC. Coins in PF70 condition exhibit full, original mint luster and bear no detracting flaws of any kind on the surface areas.

The Early Release designation is for coins that meet strict guidelines for delivery and grading. These coins arrived at the NGC or an approved third-party depository within 30 days of the US Mint’s scheduled release date for 2017 Proof Silver American Eagle coins. With a UCAM designation, you’ll note these silver coins have a strong, frosted matte finish to the design sets and a deeply-mirrored, clear background field.

Proof Silver Eagles vary in mintage each year. While the US Mint used to set mintage caps, recent years have seen those removed. Anniversary issue years tend to have the highest mintage figures for the Proof Silver American Eagle. For example, 1996 saw an increase for the proof issue after years of declining demand. 2006 has the second highest mintage of Proof Silver American Eagles in program history, with 1.09 million coins purchased in the 20th anniversary release.

If you have questions, please feel free to contact Silver.com at 888-989-7223, chat with us live online, or email us directly.